The Samsung Galaxy Note 2 is just about everything fans wanted and then some, although there are still a few details unknown, which includes a release date in the United States and of course a price for the US version. The good news for those of our readers in Europe is that a price for the Galaxy Note 2 in this region is known, which is according to a card found at IFA 2012 that reports it will be just under 640 Euros.

The image below is thanks to popular gadget website Engadget, and they managed to snap a picture of a card that detailed prices for the Galaxy Note 2 during IFA. As you can see it is in German and shows an unsubsidized price with Vodafone, and while the EU price might be considered high it’s good to remember the Galaxy Note 2 would likely be below $600 in the US considering the current model is $549 with AT&T. These direct conversions some blogs like to do never work out, which is due to higher costs in Europe and the UK.

It is worth noting there are some issues with the card that this EU price is on, and these include the fact that Galaxy Note 2 specs shown on the card are incorrect. You’ll notice the screen resolution is wrong, so are the screen size and camera specs. You must also remember that when it comes to the price you also need to add VAT within Europe, which adds a lot on the price when compared to dollars. We don’t doubt this card had been at the event, but it is more than likely one made up before the Galaxy Note 2 specs were revealed. The correct specs can be seen in our earlier article that also compares those details to the current model. 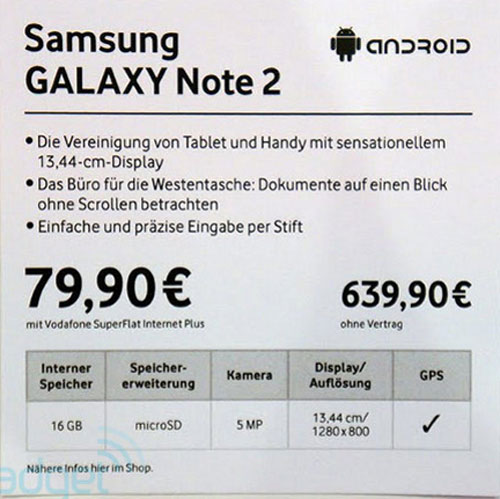 What do you think would make a reasonable Samsung Galaxy Note 2 price in the USA? Most people would expect anything above $800 to be way too much, and the good news is it’s very doubtful the Galaxy Note 2 would ever reach this price point thanks to increased taxes in Europe, which means a direct conversion from Euros to Dollars never adds up. The same has been seen before when comparing UK Apple Store prices to US Apple Store prices, which always see the US versions costing a lot less.

You can also see some early Galaxy Note 2 hands-on reviews here, although we’d love to know if you are buying the device when it arrives in your location?