The Samsung Galaxy Note 2 has received an official launch date from Sprint, which came today in an announcement from the carrier although AT&T and Verizon are staying pretty silent on exactly when their release date will be. Sprint stated that the Galaxy Note 2 will launch in just over a week, on October 25, and this will be an LTE version for much faster data.

We know PR readers have favorites when it comes to the US wireless carriers, but Sprint don’t hide the fact that they’re the “only national” carrier offering an unlimited service tagged “Truly” unlimited. This includes an unrestricted service for data, phone calls, and text messages that they hope will tempt some people to go with Sprint.

You’ll find the Samsung Galaxy Note 2 price set at just under $300 with a 2 year contract, which is for both the Titanium Gray and Marble White versions, although this price doesn’t include some extras like taxes. The Galaxy Note 2 will launch on Sprint with Jelly Bean, Android 4.1.1, although we know that Google is about to launch 4.1.2 shortly on the Nexus so it’s hoped this won’t be too far behind, especially not as long as Galaxy S3 owners are waiting for the Jelly Bean update alone.

Sprint’s press release repeated a lot of the specs we already know the Samsung Galaxy Note 2 includes, although they plugged the message hard that they are Truly Unlimited for 4G communication. You can see their message about enjoying data without limits in the image below, which is part of the release focusing on this service Sprint offers. 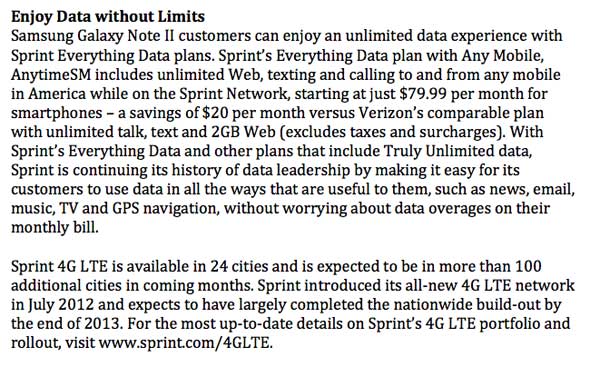 Are you happy that Sprint finalized the release date for Samsung’s Galaxy Note 2? This news followed confirmation that the Galaxy Note 2 will be launched by Samsung in New York on October 24, which conveniently puts Sprint’s release two days after Samsung’s press event. While some people can’t wait to order their Note 2, others are waiting for more color options and more choice with carriers first. You can also see an article from the start of this month, which details the Samsung Galaxy Note 2 superiority in a video when compared to the iPhone 5.