Some markets are so big that they deserve special versions of hardware, and when it comes to the Samsung Galaxy Note 2 and China the specs vary slightly thanks to an exclusive feature. It seems that Samsung is creating a version of the Galaxy Note 2 to become a standby dual-SIM phone, which means the user can use two services without the need for another phone.

We’ve already heard about the Samsung Galaxy Note 2 coming to a range of networks in the UK, and seen some leaks that point to AT&T and T-Mobile, although an exact release date has been hard to pinpoint at this stage. The Galaxy Note 2 price has also been a major debate among technology websites, with some of them getting the conversion between Euros and Dollars wrong considering there would be higher taxes in the UK and Europe.

The Samsung Galaxy Note 2 went up for pre-order on one UK website within the last few days, and while the price had been included on the order page, the small print explained this is more of a placeholder and the real price is unknown. You can read more about that in this article, which points out that some blogs were too quick to jump on that story and wrongly quoted the price as confirmed.

You can see an image below that shows 3 card slots, which delivers both a microSIM slot and one for a normal SIM card. You can expect China Unicom to receive this special version of Galaxy Note 2, although there’s no word on a launch date. The image came to us via this website, which also contains a few other images and would need a translation from Chinese. 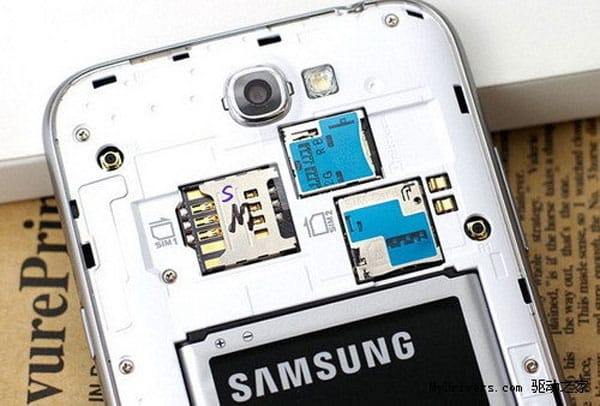 The rest of Samsung’s Galaxy Note 2 specs should be the same, which means you’ll also see the S-Pen, a 720×1280 display that measures 5.5-inches, 2GB of RAM, a 1.6GHz quad-core processor, and of course the device will run on Jelly Bean.

Would you like to see a special version of the Samsung Galaxy Note 2 in the United States, and if so what exclusive specs should it include? Take a look at the photo above showing the extra card slots, and then share a comment. Would you like to see the UK and US allow more phones to use more than one network via dual SIM support?