We have been featuring all sorts of tablet comparisons throughout November, as it’s clear that a lot of you are on the hunt for a new tablet to see you into 2014. Earlier this week you told us that the Galaxy Note 10.1 2014 has been favored over the missing Galaxy Nexus 2013, but now it’s time to compare the Samsung Galaxy Note 2014 Edition Vs Microsoft’s Surface 2 tablet.

The obvious underlying difference between these two tablets is the fact that one is running Android and the other is running on Windows 8.1 RT. Both are considered high-end tablets though, with both well over $500 to buy although Samsung’s device being the cheaper of the two.

As we’ve told you in the past, the Samsung Galaxy Note 10.1 2014 is proving to be a very popular tablet after its recent release. A $550 retail price gets you some wonderful hardware specs, such as a 1.9GHz Exynos quad-core processor, 3GB of RAM an 8MP rear camera which is new territory for tablets and a gorgeous 10.1-inch 2560×1600 WQXGA display with 4 million pixels. 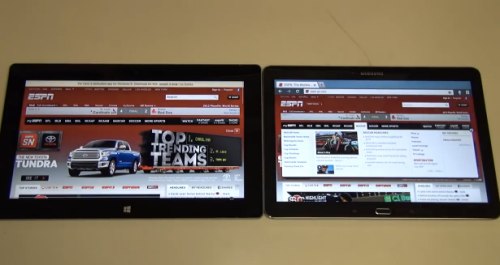 While the Samsung Galaxy Note 10.1 2014 may edge the battle of hardware specs and price, we think it is still going to come down to which operating system you feel comfortable with the most. Android 4.3 Jelly Bean is included out of the box on the Note 10.1 2014, with an upgrade to Android 4.4 Kitkat inevitable.

Meanwhile, Windows 8.1 RT is also gaining huge popularity among consumers, although it isn’t the full version of Windows 8.1 on the Surface Pro 2 that allows you to run full PC programs.

To help you decide which one you think is better, we have included a useful Samsung Galaxy Note 10.1 2014 Vs Microsoft Surface 2 review below. Take a look and let us know which tablet you prefer.