This week we have had a lot of news about new Android devices that are coming to the market, as well as the new Android Ice Cream Sandwich operating system. The Samsung Galaxy Nexus and Motorola Droid RAZR have got a lot of attention with many Android fans anticipation of the devices heightened. The Samsung Galaxy Nexus has already been confirmed by Verizon and now a possible release date shows its face.

There has been a lot of speculation the device will see a November 10th release date, but with any unreleased device this can quickly change. Now Android Central have a Verizon Map that again shows the handset having a November 10th date, but this time has the official Nexus name for the device.

The screenshot of the Verizon map shows the device should start at the $299.99 price bracket. We have already told you about the pricing of the Nexus in the UK and what it could relate in comparison in the US. The Verizon map also shows details of the Motorola Droid RAZR, but shows the handsets preorder date instead of the actual release date, and could be on October 27th.

There are many who feel that Motorola have really got a great handset in the pipeline with the RAZR. We have already given you a first impressions hands on of the device as well as UK pricing and release date. The RAZR is also set to receive an update to Ice Cream Sandwich during the first part of 2012 that will further heighten the appeal of the handset.

Will you be considering the Motorola RAZR or Samsung Galaxy Nexus? 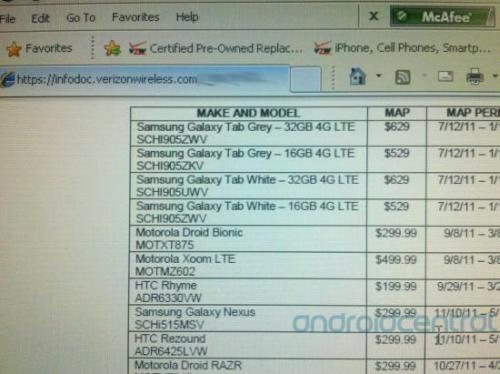