The last few days have been amazing for any smartphone enthusiast, earlier today we told about Nokia’s amazing 808 PureView smartphone and its 41 megapixel camera, now we are at last telling you about a smartphone with a built-in projector – this is the Samsung GALAXY Beam.

Samsung has been particularly busy at this year’s conference, however in our opinion the most exciting device which we’ve seen is the Beam. Not only does is offer decent performance hardware, but it’s main feature is something which no smartphone has ever boasted – a projector which can beam multimedia content at up to 50-inches (diagonal).

Before we get excited about the projector let’s give you a quick run through of other technical specifications, firstly there’s a dual-core 1.0GHz processor, 8GB of internal storage, a 4-inch display which outputs at 480 x 800, a 5 megapixel camera on the rear and a 2000mAh battery. Samsung hasn’t published a full spec listing yet, and we are told that actual specs are subject to change, however we are almost certain that there will be a 1.3 megapixel front-facing camera, 768MB of RAM (not 6GB like many reputable sources suggested) and a microSD memory card slot. One disappointment is that it will run Android 2.3 Gingerbread out-of-the-box, however an update to Android 4.0 Ice Cream Sandwich is said to be planned.

Samsung envisage you using this smartphone to watch YouTube videos with friends, or perhaps Hulu. Other usages include creating slideshows on the device and then playing them via the projector whilst music echoes from the phone’s speaker. Finally many expect Beam-centric apps to hit the Android Market where the projector can make playing games and using apps a more interactive experience.

We’ve embedded a few images showing the Samsung GALAXY Beam below, as you can see the design is dominated by the projector which is located on the upper-edge of the handset, what’s pretty impressive is the fact that it still just 12.5mm thick – not bad when you take into account Optoma’s pico projectors are all roughly 30mm thick! Check out Engadget’s photo gallery for a closer look.

Full details regarding the Beam’s projector haven’t been disclosed, but it is marketed as “ultra-bright” thanks to 15 lumens of brightness, we’re not projector experts but this seems quite substantially lower than what we’ve seen from pocket-sized projectors in the past. Another thing which we’re not completely sure about is the projectors output resolution, Samsung’s official blog claims that it projects a crisp high-definition image (which we’d usually interpret this to mean at least 720p), but other sources say that it actually outputs at 640 x 360 – we’ll confirm/refute this when we know more. A demonstration showing the projector in action can be seen at the bottom of this post, the video only shows the projector being used in dark conditions and the video does look grainy (see the image below) – but we have to remember the fact that there’s a projector built into a smartphone is an accomplishment in itself. 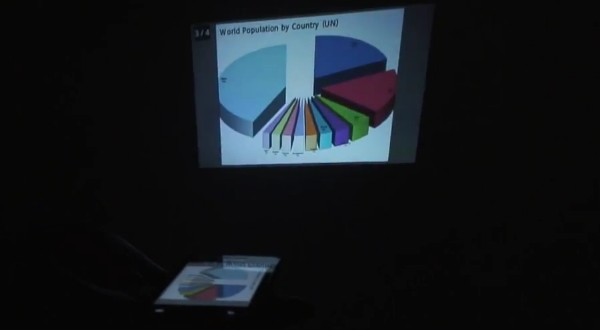 Our biggest concern is battery life, the 2000 mAh battery would be great for smartphone usage, but projectors are renowned for being juicy, so Samsung has its work cut out. We shouldn’t keep comparing the Beam to Optoma’s pico projector’s but there’s no other points of reference at present, the PK301 boasts a 1410mAh battery which is said to allow for up to 1.5 hours of projection – so what will a smartphone deliver from a 2000mAh battery when it has a dual-core processor to power etc? This is one thing we’re worried about, however pricing is also something which may shock us.

Do you think the Beam’s projector will drain the battery too rapidly?