Earlier this week we spoke about the fact that 2014 was now becoming the year for ‘bigger’ tablets. Just when we thought that 10-inches was the maximum and perfect size for consumers, it looks like Samsung has changed the landscape and perception that tablets can still go even bigger.

We know that the company is about to launch their unprecedented 12.2-inch Galaxy Tab Pro and Galaxy Note Pro tablets, but now rumors are again emerging suggesting that Samsung may even be thinking of going one step further.

Specifically, 2014 may also be the year when we see Samsung release a 13.3-inch tablet, if you can stomach that thought. Don’t forget that this is also coming off the back of strong rumors that Apple will release a 12.9-inch iPad Pro in the same year.

Samsung wouldn’t want Apple to have the 13-inch tablet space all to themselves, so we have a feeling that there may be some substances to the latest whispers. 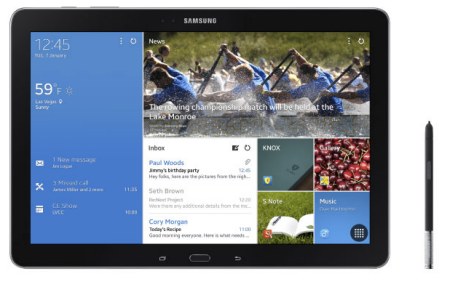 It is all about personal preference though. We think 7-inches is a great size, so could you honestly consider owning a 13-inch beast in your hands or do you think that this size is best left to the notebook form factor?

Assuming that Samsung really is working on a 13-inch tablet, we can only imagine that the Korean maker would want to equip it with even better hardware specs than the Galaxy Note 12.2 Pro. What about the possibility of a Samsung tablet with dual-boot Android and Windows 8 capabilities?

Then again, it’s still early days and we’re yet to see conclusive evidence that this is in the pipeline. Give us your thoughts on the idea of a 13-inch Samsung tablet and what kind of specs you would like to see on it.