Things are hotting up in the tablet world, especially with the arrival of the iPad 2 and the BlackBerry Playbook. But one device that may not get the recognition it deserves is still powering on to be a contenteder, the Motorola Xoom.

According to Droid-Life, who have pictures as proof, the WiFi only Xoom’s price tag has now been labelled at $539 at Sams Club, which is a far cry better than the $599 price tag it was given just weeks ago by Motorola CEO Sanjay Jha.

The WiFi only iPad 2 starts at $499 for the 16GB model, therefore we wonder whether Motorola will cut the Xoom’s price even further to stay competitive, $40 isn’t a massive difference in price, however it may be the difference between the Xoom’s success and its failure.

One certain hinderance that the Xoom has behind the iPad is lack of Android apps for specific tablet devices, but given time, we’re sure that the Xoom and other Android tablets will come in to their own and could potentially be up there with some of the best tablets on the market today.

Oh, just one more thing. We checked out Droid-Life’s gallery on the Motorola Xoom and as you can see, it looks as though someone made a slight mistake when it comes to what version of Android it was truely running. Android 2.0 Honeycomb? 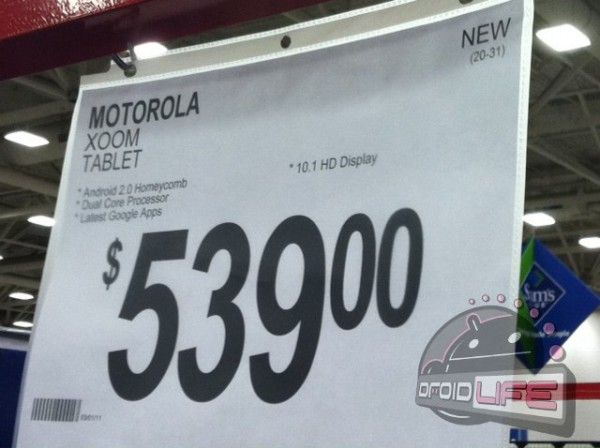