If you play FIFA 15 Ultimate Team regularly, you’ll know just how addictive the game mode is. It’s also very popular with professional players, highlighted by the fact that Samir Nasri of Manchester City is now the target of an ongoing online scam.

You may recall the fact that Nasri is rated 84 in FIFA 15, a rating which Nasri is not actually happy about. Showing good humor though, Nasri has since Tweeted EA a photoshopped image of the player having a 95 rating in the game – making him unstoppable as the best player in FIFA 15 ahead of Ronaldo and Messi.

Obviously it was just meant as a joke and we can see that EA themselves have seen the funny side of it by retweeting this image on their official page for other FIFA fans to see. 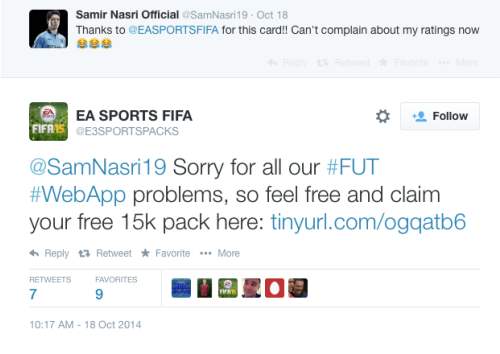 What isn’t a joke though is the comments that followed under the image from one constant FIFA 15 exploiter who tried to bait Nasri himself into a scam. We captured the image above which offers Nasri a ‘free 15k FUT pack’, as compensation for the well documented FIFA 15 web app problems.

The problem here, is that this is a fake account trying to take on the persona of EA by having the same profile image and almost a similar username – the “E3SportsPack” account is a dead giveaway though.

The URL that is being circulated by these hackers is also malicious and those opening it may result in a phishing warning pop-up and an auto-block.

As a result, it goes without saying that you should be very careful which FIFA 15-related links you open on Twitter. It seems that nobody is safe at the moment until EA solves this problem for good, not even Samir Nasri.