It was only last month that THQ announced both the Saints Row: The Third Platinum Pack — which includes an exclusive custom-molded Saints Row headset — and the extra special Saints Row: The Third pre-order edition known as Professor Genki’s Hyper Ordinary Pre-Order Pack. Now it appears that yet another Collector’s Edition has just been revealed.

The special Collector’s Edition in question is the Saints Row: The Third ‘Smooth Criminal Edition,’ which according to AnthonyD over on thegamershub.net website is exclusive to Australian retailer EB Games. If you thought that the Platinum / Pre-Order Packs were pretty awesome, then I’m sure the ‘Smooth Criminal Edition’ will interest you even more.

Besides containing the game’s soundtrack, which is included in other collector’s editions of the highly anticipated Saints Row: The Third game, the ‘Smooth Criminal Edition’ comes with its own unique packaging. It also comes with some other cool collectible items such as silver-plated Saints Crest cuff links, a pair of sunglasses, and bullet-shaped ice cube trays.

For those that still don’t know what Saints Row: The Third is, it’s a sandbox-style action-adventure game — which is being developed by Volition, Inc and published by THQ — that’s set in the fictional city of Steelport. As for the story of the Saints Row: The Third game, this focuses on the gang war between the Saints, and a rival criminal group known as the Syndicate.

Just like with previous Saints Row titles, several celebrities have provided the voices for characters in the game. For example, Hulk Hogan is the voice behind professional wrestler and Saint Row ally Angel De LaMuerte, Sasha Grey voices the character Viola DeWynter, and ‘Lost’ and ‘Hawaii Five-0’ star Daniel Dae Kim reprises the role of Johnny Gat, leader of the Saints. 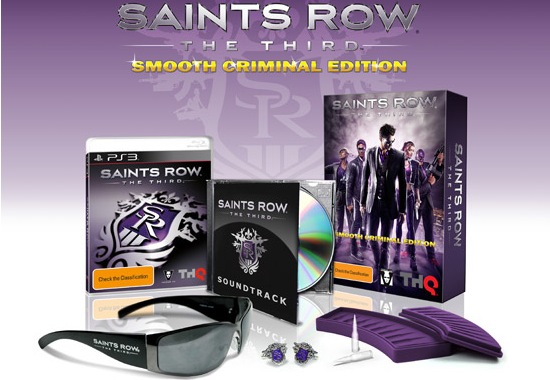