The ASUS Eee Pad Transformer has sold very well, therefore it seems inevitable that ASUS will release a second-generation Eee Pad Transformer to build on its success, a recent article posted on AndroidCommunity talks about some Transformer 2 details which have apparently been leaked by “multiple sources”.

We are always a bit sceptical when we hear that multiple unnamed sources have leaked details regarding a new product, however we like to write about these rumors just in case they turn out to be legitimate, so let’s get into the nitty gritty.

According to the article the Transformer 2 could well be the first NVIDIA Kal-El quad-core tablet to ever hit the shelves, we do not know too much about the Kal-El SoC, however AndroidCommunity suggest that this may be the NVIDIA Tegra 3 which will be built on the new 40nm architecture – this new architecture should allow cooler running temperatures and better performance / efficiency. We do think that the Tegra 3 name doesn’t really suit a quad-core SoC, therefore we like the idea of calling it the Tegra 4 instead.

The original ASUS Eee Pad Transformer was no slouch with its 1 GHz dual-core nVidia Tegra 2 system-on-a-chip, however imagine how much better this tablet will be with more processing power and better efficiency – we really think ASUS could be onto a winner with this one. Below we have embedded a graph which seems to suggest that Kal-El SoCs will deliver 5x the performance of Tegra 2 SoCs. 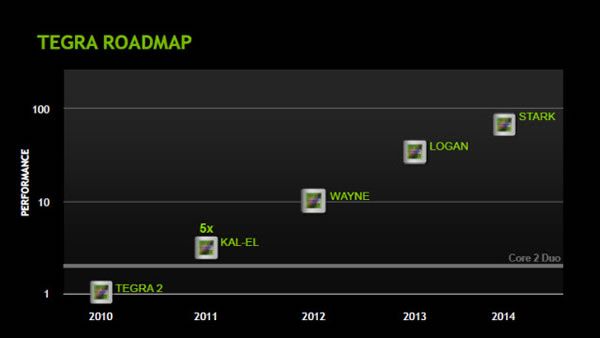 Currently we are led to believe that the ASUS Eee Pad Transformer 2 will arrive this holiday season, seeing as how its predecessor arrived in late March this year we are quite shocked to hear rumors suggesting that a follow-up device could arrive within a such a relatively small amount of time – if I bought the first-gen Transformer I think I would be frustrated by this, however we have to remember that these are rumors and nothing has been confirmed by ASUS.

What else would you like to see from the second-gen Transformer?