The news that the Motorola is a vast improvement in the tablet market when compared to the iPad was certainly good news for Verizon. However, when we learned that consumers would have to part with their new device for 6 days for the 4G/LTE upgrade it seemed like a bitter pill to swallow. Thankfully one guy might be able to put a smile back on you face, as he has rooted his Motorola Xoom, and a working recovery is to come.

My Brain Hurts has been explaining how the Xoom comes rooted right out of the box, the reason being is the fact that the new Google Android 3.0 Honeycomb device has Fastboot support. The only thing that was needed was to compile a new kernel, which as some of you might already know was not an easy task.

The reason for this was the fact that it was not available, Harmony kernel was the first thing to try, but that did not work. Thankfully after some persistence Koushik Dutta was able to create a working recovery, which allowed for a root and finally a Superuser. 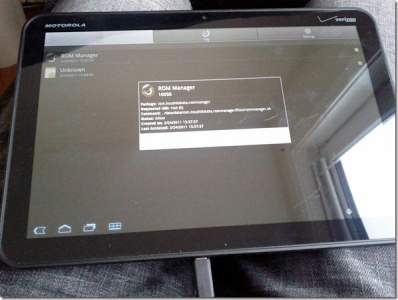 Nothing works at the moment, as the SD card slot does not function, but that will come at a later date. My Brain Hurts offers full instructions to root your Motorola Xoom tablet, but remember that you need to install fastboot on your computer first. Let us hope that ROM Manager support does not take too long, but there are ways around this.

For those of you who are about to take possession of the new Xoom, then you might want to visit how2moto YouTube channel. These videos are very informative in how they explain everything you need to know about the new Honeycomb tablet.

Would you consider rooting your Motorola Xoom?