EA has just sent out some juicy information with regards to the highly anticipated reveal of FIFA 16 Ultimate Team player ratings. Everyone wants to know what rating Messi and Ronaldo are in FIFA 16 FUT and now it looks like EA may have revealed Messi’s rating to be 93.

With Ronaldo winning the Ballon D’Or for the previous season we could see the Real Madrid star have a higher rating than Messi for the first time since we can remember.

Many argue that Ronaldo had the better season than Messi too, but the same could have been said for the previous year, but Messi still ended up with a higher rating than Ronaldo on FIFA 15 with a 93 compared to 92. 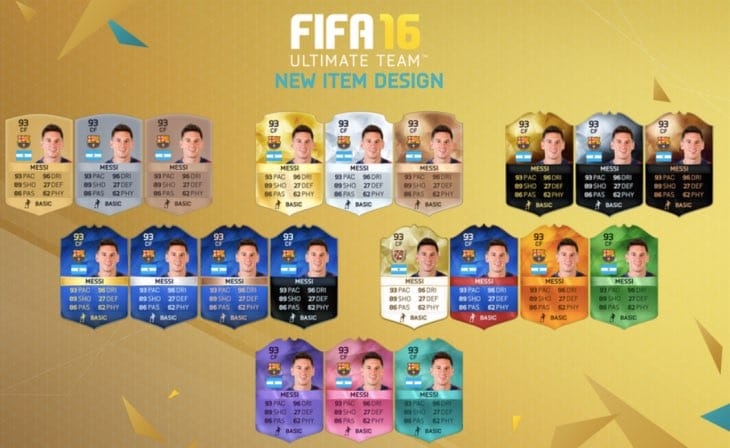 EA’s image above confirms the official FIFA 16 FUT card design and showcased as the player is Lionel Messi. The rating is 93 for every card, seemingly implying that this is going to be his rating for FIFA 16.

Then again, it could be a smokescreen with EA just using his rating from FIFA 15. Some are taking this as an indication though that Ronaldo may have a 94 rating on FIFA 16.

Also take into account that Real Madrid is now an official partner of FIFA 16 and EA has confirmed that they will be upgrading player models for several Madrid players for the upcoming game – with Ronaldo specifically being one of them.

Do you think it could really happen where Ronaldo will have a higher rating than Messi even though Messi is on the global cover? Let us know your thoughts on this as some conspiracy theorists out there believe that one of Messi’s clauses in the FIFA deal is that he has a higher rating than Ronaldo each year.