CES 2012 is living up to its hype so far, satisfying even the most hardcore tech lover’s desires so far. As far as tablets are concerned we haven’t been disappointed on that front either as we have been able to bring news of the Acer Iconia Tab A700 as well as details of the BlackBerry PlayBook OS 2.0 upgrade. Now we are hearing of another tablet from a manufacturer that may not be as world renowned but is certainly making an impact in China and that is Rockchip.

The company was spotted at the convention showcasing a collection of tablets that surprisingly boast the latest that Google has to offer in terms of operating system, Android Ice Cream Sandwich. While they do not feature the Android Market and are not officially approved by Google, the tablets themselves have the potential to be fairly impressive.

As Slashgear reports the Rockchip booth had a thin 7” tablet that was not fully functional which they were reluctant to show off understandably. However they did have a 10” tablet that they weren’t shy to showcase which according to reports shared a resemblance with Samsung’s Galaxy Tabs. Slashgear were able to preview the device and in the brief time they were there and were left feeling indifferent about it.

The positives they found were that it was a stable prototype and responsive. It had an 8 megapixel camera on the rear, which is where the resemblance to Samsung’s tablet was found. They were not impressed with the 10” display despite the size, claiming it was ‘average at best’ and while it was running Android 4.0.3 Ice Cream Sandwich, it was an early build version.

Whether the manufacturer will make an impact in any market other than those in China remains to be seen, but their effort to get noticed has to be admired if nothing else. Have you been impressed with what CES has produced so far? 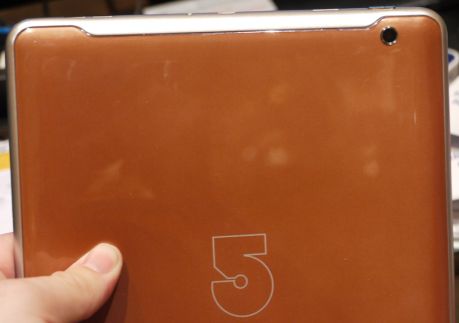