It was only a few days ago, that I brought our readers news about the Linkin Park DLC that was due to be released for the Rock Band franchise this week. Now it appears that there are even more songs on the way, with the upcoming Country Track Pack 2 disc.

According to Stephany Nunneley over at vg247.com, Harmonix recently announced that the Rock Band Country Track Pack 2 disc will be available to buy on February 1st. The disc features a total of 21 songs, including tracks from artists such as Keith Urban and Johnny Cash. 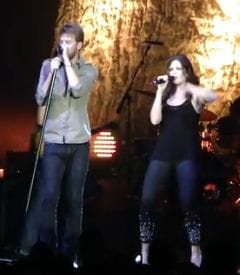 Most of the tracks will start off being exclusive to the Rock Band Country Track Pack 2 disc, before they eventually join the Rock Band 3 Music Store. The disc — which is being published by Electronic Arts — will cost $29.99, and will be available for the Nintendo Wii, Xbox 360 and PS3.

While we’re on the subject of the Rock Band game, have you ever seen a real guitar used instead of the Rock Band controller? If you haven’t, then check out the video that features on an article by Luke Plunkett over at kotaku.com.