The day has finally come to decide if you will purchase Rock Band 4 in digital or as a boxed game, and now we are giving readers a quick look at the cost before a midnight UK launch. The Rock Band 4 price might vary a little between popular stores like Tesco, Argos, GAME, Asda and Sainsbury’s.

If you have been watching online countdown clocks to the midnight release, now you be thinking about what store to pickup a copy from and want to save time by heading directly to one retail location in the morning, or this evening. 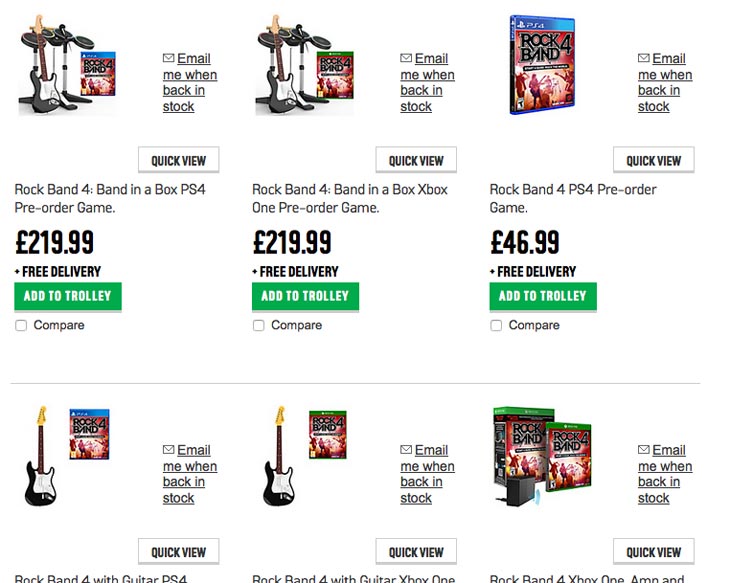 There’s a chance Asda or Sainsbury’s might sell the “game only” for a slightly cheaper price, as we have seen the latter store discount to £35 when purchasing shopping in the past. We cannot confirm if this is the case today, so leave a comment if you’ve seen cheaper prices anywhere.

Rock Band 4 isn’t on Xbox 360 or PS3, so you will need the latest generation of consoles to get hands-on. It’s worth noting that Tesco price Rock Band 4 at £219, but this is “out-of-stock” online until most likely midnight and is for the “Band-In-A-Box” bundle that comes with a Wireless Fender Stratocaster Guitar, USB Microphone, and Drum Kit.

The Band-In-A-Box is priced the same at GAME, Amazon, and Argos as well. If you decided to go digital, then you might notice the PSN store currently takes you to a pre-order page that states, “Unable to find this page”. Not sure why that is, but it will likely change by midnight unless you are choosing to pop to a supermarket instead.