There have been a few Hollywood films about the famous Robin Hood, and today we can tell you that Robin Hood The Legend of Sherwood lands on the Mac. The game has just been launched on the Mac App Store this week, as you take on the role of the hero to help the poor.

Robin Hood: The Legend of Sherwood 1.0 that was originally developed by Spellbound Entertainment is now available for OSX Lion. There are versions in English, French, and German as you take on the role of Robin Hood as well as his merry men. Players can also be Friar Tuck, Little John, or Will Scarlet as they take on the infamous Sheriff of Nottingham and Guy Gisbourne.

This is a real time strategy game as you take the battlefield against the likes of nasty Prince John Lackland. During the game you will enjoy the great English landscape of 1190 with massive castles and comical characters.

Your first mission will have you taking control of Robin Hood as you attempt to free your comrades, but you will have to be smart and fast. There are over thirty non-linear missions with five different castles that are visited at night and day times. You will even experience different weather conditions as you take the role of nine characters.

Users can take control of their hero’s sword in battle with an innovative fighting system, and a variety of tactics can be used to gain victory. Robin Hood: The Legend of Sherwood 1.0 is available worldwide on the Mac App Store for $19.99. 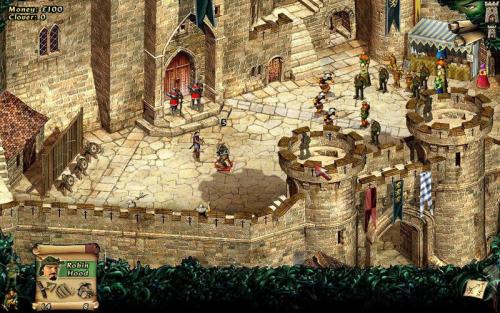