We still have a few weeks to go until the highly anticipated Rise of the Tomb Raider release date on Xbox One. However, we can see that the despite the game having AAA status, you can now buy it for an unusually lower price in the UK.

While you would expect to pay well over £40 for a new release in the UK, we can see that Rise of the Tomb Raider is selling for £39.99 at many stores and you can even get it for lower than that at one store.

At the moment, it appears the best place to buy Rise of the Tomb Raider online in the UK is at GAME. They are offering the game for just £40 at the moment, but you can actually get the game on Xbox One for as low as £34.99 by inputting the promo code 5OFFGAME. 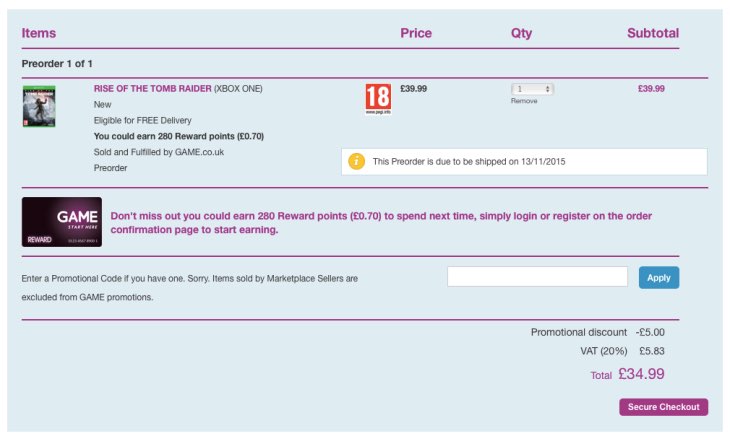 This is working right now as you can see above and it is a fantastic price for one of the biggest games that Microsoft are launching this year.

Remember that it is an Xbox exclusive too, so you won’t be able to get Rise of the Tomb Raider on PS4 – not yet anyway.

Are you surprised that Rise of the Tomb Raider is already selling below the £40 mark given that it hasn’t even been launched yet?

If you are interested in buying this, now may be the time to place that order. Let us know if you have spotted any other deals for Rise of the Tomb Raider – both in the UK and in the US.