Back in May bbleaks.com said “The BlackBerry Tablet Is Real”, which was confirmed by their “connect” at RIM and followed rumors of the company ordering 8.9-inch screens via Hon Hai. In the last week we have seen more information flowing online, which included news of a BlackBerry BlackPad release date and a new BlackPad domain name.

Can RIM’s “BlackPad” tablet compete with the Apple iPad? ZDNET points out that BlackBerry had an advantage in the Smartphone market before Apple stepped in with the iPhone, and we know how that turned out.

This time Apple has an iPad already proving a success, and with RIM coming after Apple with a Tablet, can they still have a big slice of the tablet pie?

Bloomberg comments on BlackPad specs, and claims the device will have a 9.7-inch form factor, and points to some iPad killer features. The BlackPad could have the ability to tether with a Blackberry Smartphone, and may include front and rear facing cameras.

Reports suggest the BlackPad may not support a cellular option, but BlackBerry users may not find this a problem thanks to the tethering abilities. Would you prefer a built-in cellular option? 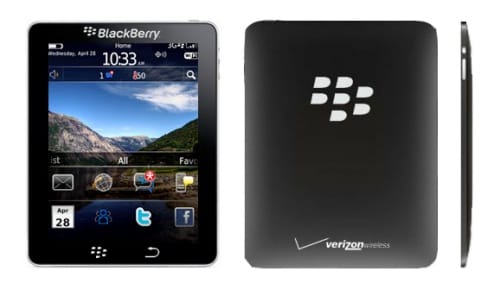 The image on this page is just a mock-up via bbleaks.com

We expect the BlackPad to cause problems for Apple, but more so in the corporate world. Cheaper Android-based tablets may cause a pricing problem for the Apple iPad, and all this can only benefit the end user. RIM will need to get this right, and their stock price really needs the help this year.

What do you expect from the BlackBerry Tablet aka BlackPad? Do you see the iPad as a big problem for RIM’s plans?