Facebook’s campaign on taking over the world continues to flourish as their latest feature, Facebook Messenger, which is set to rival even their closest competitors, is now available to download in the UK. The social network giant’s answer to RIM’s BlackBerry Messenger, will give them even more control over the way people communicate with each other.

Until now the function was only available in the US, but now Brits will also be able to take advantage of this communication method. For those that are unfamiliar with Facebook Messenger, it is a free app available at the App Store for Android and iPhone devices. As we previously explained in an earlier article it allows Facebook users to send and receive messages to other members of the social network, whether they are online or not, much like iMessenger and Whatsapp.

When received, the messages will appear in both notifications and text messages, so as to ensure more chance of the recipient reading it. Group chats will also be a feature of this function. A whole backlog of chat history from chats, messages and emails, will also be archived, according to PC Advisor, which can be accessed via the website or the user’s handset. When the app launched in the US last month, Facebook developers explained that the aim of this app is to make messaging easier.

RIM in particular must not be best pleased at the announcement of this new app from Facebook, as the way things are going with their BlackBerrys, their BBM is just about the only positive and attractive part of their devices. They have struggled in the smartphone market with the rise of the iPhone and Android popularity and have even tried to establish themselves in the tablet market, again failing to compete with the popularity of Apple’s iPad device.

What do you think of this new Facebook app? Will you be using it in preference over other similar apps? 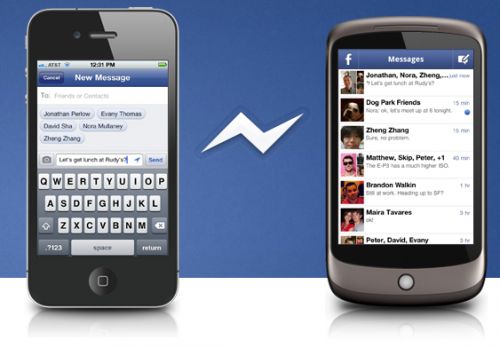