With the delays of the Nexus 9 on T-Mobile there seems to be a pattern building, as the carrier continues to struggle to release a Nexus device on time, and so rumors of its release being indefinite are starting to gain traction. There is no explanation as to why the tablet has been delayed, but we are sure we will know very soon.

A revised T-Mobile Nexus 9 release date is still undetermined, although the carrier has calmed fears of them never releasing it by saying it has just been postponed, and that they will confirm its new launch date once they are in a position to do so.

We are not certain of when that will be, and more worryingly T-Mobile seem to be clueless as well, and so is another reason why the likes of Verizon are just pulling away from its rival carrier, as they have a far better line-up. 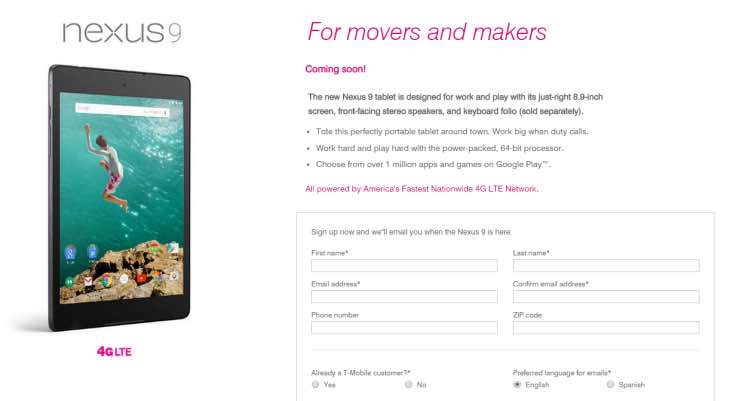 The thing is, the Nexus 9 was one of the most sought after pure Android tablets this year and for T-Mobile not to offer it to customers is a huge blow, and we suspect some of them have even jumped ship and signed a new contract with a rival carrier.

To rub salt in the wounds, customers are still waiting for their Nexus 6 handsets, as they were meant to be shipped weeks ago, yet T-Mobile have even been reluctant to update them on why there is a delay.

Why do you think T-Mobile has such an issue with Nexus devices?