Many of the hardcore gamers out there will be aware that next week marks the start of the Tokyo Game Show, one of the biggest annual game conferences in the world. It is held in Japan and will span over four days as usual, from September 16th until the 19th. Capcom are one of the many games developers who will be taking advantage of the conference and this year they’ve launched a Resident Evil: Revelations trailer ahead of the event.

We have been doing our best to provide our readers with the details revealed about the game up until now. So far we have brought you the gameplay trailer, which was some of the first footage released, we’ve also brought you confirmation that it won’t be available until 2012 for the 3DS and even details concerning co-op mode, which as it turns out will not be a feature in the latest title from the hit horror series of games.

Capcom’s TGS trailer reveals two out of the variety of characters expected to appear in the game, the first is a new female known only as Rachel and the second is the more familiar Jill Valentine. The trailer is set onboard a cruise-ship, seemingly abandoned and of course very dark. As the first character appears, she seems to be investigating the place when she finds a substance she is unfamiliar with. It isn’t long before she discovers a zombie like being which doesn’t die when shot, leaving running as her only option. 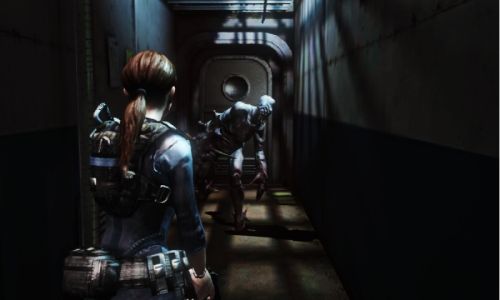 According to VG24/7, RE: Revelations sees Chris Redfield and Jill team up once again, in order to try to contain an outbreak, which happens to be on a cruise-ship this time around. The game will be showcased at the Tokyo Game Show next week in the meantime check out the trailer for yourself below.

Are you looking forward to the new Resident Evil title?