Uh oh, it looks like Capcom are in hot water once again with the gaming community. We still haven’t forgiven them for Breath of Fire 6 but now Resident Evil fans are unhappy after a bit of false advertising has led to calls for Resident Evil Revelations 2 refunds.

To give you the long story short, Capcom initially advertised the PC version of Resident Evil Revelations as having ‘offline local co-op’.

This is the same feature as the console versions of the game and PC owners were fully expecting it to be possible on the Steam version too.

However, to everyone’s horror the PC version of the game in actual fact does not support offline local co-op, only single player. 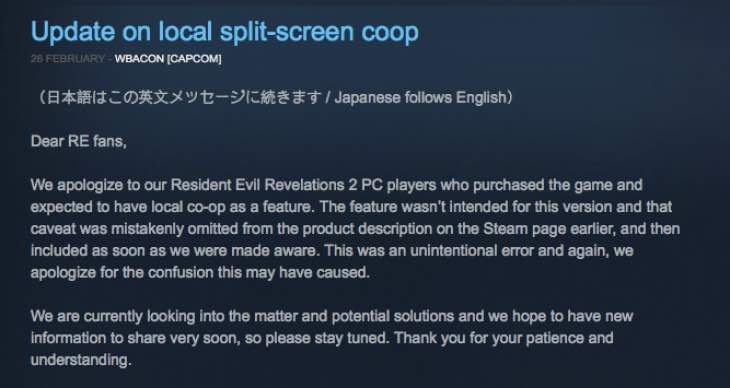 The big issue is that not only does the PC version come with a feature missing that was on console, but Capcom did not reveal this to buyers in the build-up to launch.

Instead, fans had to find out themselves by reading the Steam description, which is why so many are angry right now. Capcom has already apologised for the situation and as far as we’re aware, the refund option is available for anyone who wants their money back.

It’s also worth pointing out that there will not be a Resident Evil Revelations 2 local co-op patch at a later date – it simply doesn’t support it.

Were you affected by this mess? Give us your thoughts below and whether you will be seeking a refund or not.