With the PC version of GTA V launching on April 14th, we wanted to give you a final reminder on the required GTA V PC minimum and recommended specs that you’ll need in order to run the game.

While most of you will obviously be aiming to play GTA V PC on high settings, others are more concerned about whether their aging system can run the game at a bare minimum.

You’ll be pleased to know that Rockstar already released both the minimum and recommend GTA V PC specs requirement a few months ago.

However in case some of you missed it, we have re-posted the information below allowing you to have a final check. 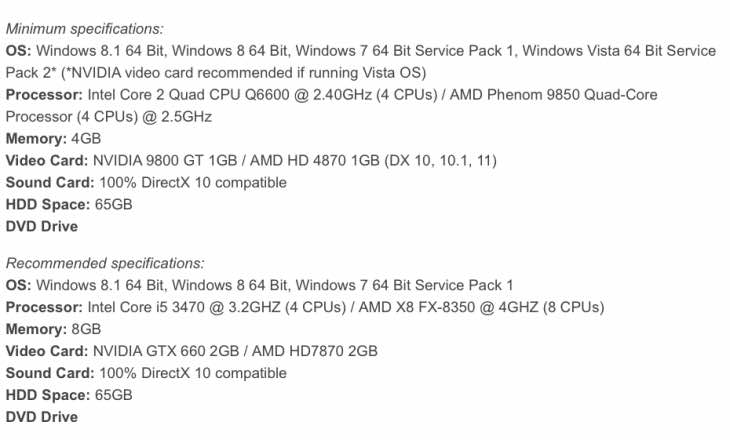 As you can see, you’ll need at least 4GB of RAM as well as a NVIDIA 9800 GT 1GB or an AMD HD 4870 1GB graphics card – for minimum settings. Rockstar also mentions that you’ll need a quad-core processor at the very least in order to run the game.

As for the GTA V PC recommended specs, Rockstar needs you to have a system that has 8GB of RAM at your disposal. Graphic card choices include the speedy NVIDIA GTX 660 2GB or the AMD HD7870 2GB, while processor options include the Intel Core i5 3470 @ 3.2GHZ or the AMD X8 FX-8350 @ 4GHZ.

Finally, Rockstar states that 65GB of empty space on your hard drive is also recommended to run the game on any settings.

Take a look at the official chart above and let us know which specs you will be aiming to run the game on. Will you hit low, medium, high or ultra?