We didn’t see a surprise Red Dead Redemption 2 announcement at E3 2015 sadly, but this week there has been some movement with some rumors that you may want to know about.

You probably shouldn’t look too much into this, but a survey recently sent out by Ubisoft is doing the rounds on social media.

This is due to the fact that Ubisoft were asking gamers what games they are planning to purchase. Included on that list was none other than Red Dead Redemption 2 and also Skyrim 2 – which you can see below. 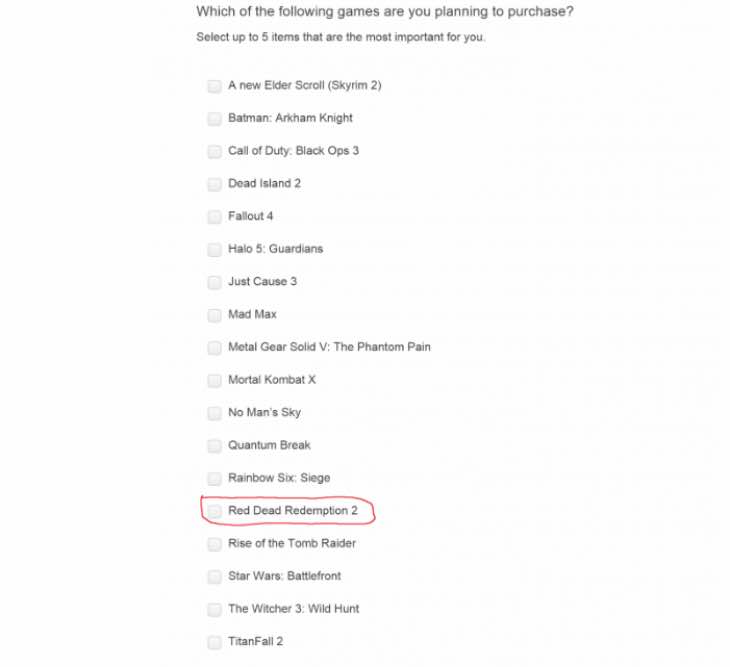 Either Ubisoft knows something we don’t, or this list is just a hypothetical question with Ubisoft wanting to do some research on what the gamer mindset is now.

The latter option seems the most likely, as why would Ubisoft know before anyone else that Red Dead Redemption 2 and Skyrim 2 are in development? – it seems highly unlikely.

Still though, it’s worth sharing as this is the second RDR 2 rumor to pop up after previous whispers online suggesting that the game will be called Red Dead Redemption 2: Legends of the West.

Let us know your thoughts on this and if you are still patiently waiting to see the game from Rockstar after GTA V.