To say that I’m a little excited about the release of FIFA 12 being less than a month away would be an understatement, and I’m sure I speak for many gamers when I say that. The game is due at the end of the month and the build-up to it has been a satisfying one, with many details about the game being reveled.

We recently brought you news of a partnership between EA Sports and Premiership Football Club Fulham FC. The deal means the club will receive various FIFA 12 exclusives courtesy of the publishers. Many of you will also be aware that the game’s demo is due out on the 13th of September across all platforms, giving the public the first taste of what the game is like.

Among the details of the game revealed so far, the most talked about part of FIFA 12 is reportedly the revolutionary gameplay feature, the new Player Impact engine. In a recent interview with Gaming Examiner, FIFA’s gameplay Producer, Santiago Jaramillo stated that it has been two years in the making and was started alongside FIFA 11.

He explained how every year when the title comes out, there are great expectations for it and each time it must be an improvement from the last title, without changing so much that it becomes a different game. This is why the main focus of this year’s title has been mainly improving the Player Impact Engine making it the most realistic it’s ever been. While it remains to be seen just how realistic the game will be, what i do know is that it is far more realistic than PES 2012, judging from the demo i recently played.

The game is becoming so realistic it is no wonder people are having to remind others that it is not. In an article at 7Cantonas, a Manchester United fan expressed his concern that other United fans think the game is representative of the real world. The reminder came about after a number of fans were left disappointed when United Manager, Sir Alex Ferguson failed to sign Dutch midfielder Wes Sneijder, despite the United Squad being seemingly brilliant already.

Check out the links above for full details on the new Player Impact Engine and the opinions of the Man United fanatic. Are you looking forward to FIFA 12? 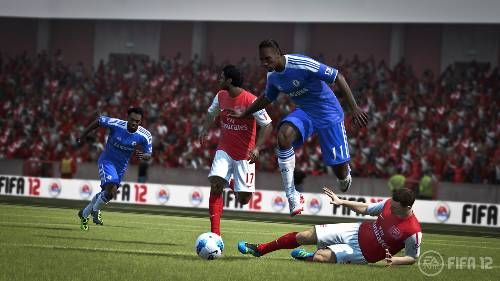