The most famous and most significant war during the 20th century is once again about to be experienced in video game form. World War II has been a feature in many games over the years but that hasn’t stopped game developer Stuart Black from attempting to build a new WWII FPS called Enemy Front.

Formerly of Codemasters, Black has now joined forces with City Interactive and has kicked off the start of his new career move by announcing a new game which will allow gamers another chance to kick some Nazi butt. City Interactive describes Enemy Front as being a ‘realistic tale of a hardened soldier.’ According to PSLS it aims to give gamers a ‘visceral experience.’

As the developers explain it will include engaging missions that range from sabotage and espionage assignments to quick skirmishes and engaging enemies behind their lines. These missions will include real-life activities that took place during the war such as deciphering the Enigma code, a task that required allies work out crucial messages which the Nazis were sending each other using the Enigma machine and the Wolf’s Lair, which was an assassination attempt on Nazi leader Adolf Hitler.

As Enemy Front is in fact a game and not a documentary there will be aspects of it that do not represent actual events, for instance part of the story describes the Nazis as working on some kind of ‘super weapon’ designed to win them the war. Reports also suggest that the game will be built using CryEngine 3, an advanced game engine from Crytek that was used for their hit game Crysis 2. It features particular attention to detail as far as firefights and explosions are concerned making it perfect for this type of game. The game is expected to launch next year, details other than that are rare.

Are you looking forward to re-living the Blitz in the new WWII game Enemy Front? 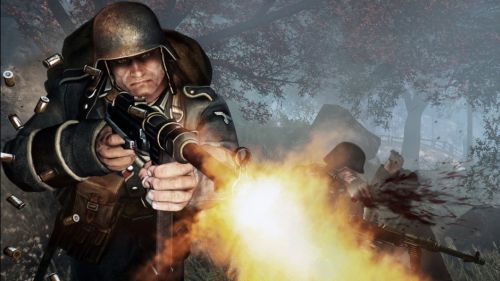