Yesterday we told you all about Razer’s Battlefield 3 protection case for iPhone 4, now we have another product to tell you about which will accompany the release of Battlefield 3, this is the Battlefield 3 Razer Onza Tournament Edition Xbox 360 controller and its features could well give you the edge when playing BF3 on your Xbox 360.

Before running through the list of features we must tell you that this is almost identical to Razer’s Onza Tournament Edition controller, however it features some neat Battlefield 3 graphics to appeal to those of you who are looking forward to the release of EA DICE’s next first-person shooter. We have embedded some images below.

So what makes this controller so great? Well the resistance of the analog sticks can be adjusted to suit your needs, also the A, B, X and Y buttons are backlit and utilize hyperesponse technology which we guess respond quicker than standard Xbox 360 controllers. There are also two customizable buttons which you can set to undertake certain commands, we like the idea of these buttons being used instead of clicking in the analog sticks. Other features worth mentioning include its non-slip rubber surface, quick release USB connector and 15 foot lightweight braided cable.

As with the Batteflield 3 iPhone 4 case the controller will arrive on the game’s release date, 25th October, in the U.S. it will cost $59.99 and in the EU it will cost â‚¬59.99 – we would love to see a wireless version of this controller arrive but we are told that Microsoft licensing won’t allow this.

If you are sceptical about this controller you have to remember that in terms of physical design and functionality it is pretty much identical to the Razer Onza Tournament Edition, Cnet scored this 4/5 in their review and said “the Razer Onza Tournament Edition is easily one of the best third-party Xbox 360 controllers we’ve ever used”, that said user reviews aren’t so complimentary – especially when it comes to “clicking in” the analog sticks (L3 and R3).

Below we have embedded a larger image showing the Battlefield 3 Razer Onza Tournament Edition Xbox 360 controller in all its glory, will you buy one? 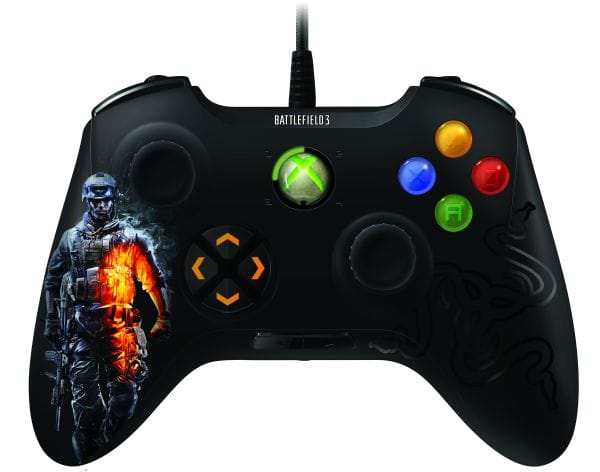