The internal hardware within today’s top-end tablets allows people to play pretty impressive games on-the-go, but what if there was a tablet primarily designed for hardcore PC gaming? Well that’s exactly what Razer has delivered with a new product concept which they are showing of at CES 2012 – let us introduce you to Project Fiona.

So what’s Project Fiona,? Well in short it is a Windows-based tablet which aims to deliver an immersive gaming experience, this is achieved thanks to force feedback, controllers situated on both sides of the tablet and THX certified audio. What’s special about this tablet is the fact that it can run any of today’s PC games out-of-the-box thanks to a super-impressive 3rd-generation Intel Core i7 processor, sadly we don’t know any details in regards to other specs such as RAM, HDD or GPU, but if you watch the video embedded at the bottom of this post you will see that it is pretty impressive in terms of graphical quality.

You can see an image showing off Project Fiona’s form-factor below, as you can see you grip the tablet via to grips situation on the left and right side of the tablet (when used in landscape mode), each grip features what looks like four buttons an analogue stick and at least one trigger button. We are a little worried about the ergonomics of this as it looks like it will be impossible to use the four buttons without taking your thumb off the analogue sticks. 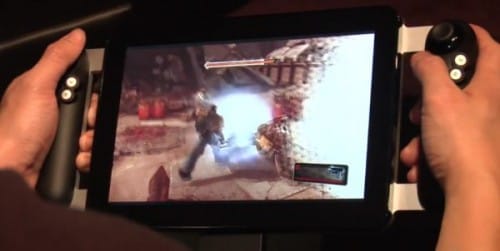 Razer assures us that you will be able to plug in your own USB keyboard and USB mouse for games which do not support gamepads, also Project Fiona will feature multi-touch and an accelerometer for games which support such controls. Other things to mention include the microphone and headphone jacks and a specifically design user interface to allow ease of use.

It is hard not to be impressed by the video below, but whether people will see this as an alternative to a gaming PC, standard tablet, gaming laptop or hand-held console is yet to be seen, we are a little worried that the potential $1000 price tag will put people, even given the fact that this price seems reasonable considering the fact it will come with genuine Windows 7 (or perhaps 8) along with very advanced internal hardware and features. We just think buying a cheap tablet with a game streaming service such as OnLive could be a more viable option for a lot of people.

Do you think Project Fiona will always remain a concept? Would you pay $1000 for it? Let us know in the comments section below.