A lot of you may be looking forward to playing Uncharted: Golden Abyss when it lands on the PS Vita as part of the US launch next month, but one other game that you’ll want to pick up is Rayman Origins – one of the most impressive looking titles on Sony’s new handheld so far.

For those of you that haven’t picked up the console version, we would recommend the upcoming Vita game which will be available on February 14th as a no-brainer. A lot of critics are calling Rayman Origins the ‘best platformer’ in years and after seeing how the game looks and feels on the Vita, we would have to agree with those claims too.

The PS Vita version won’t be a straight up port though from console, as the handheld version will introduce a new slick feature which will be exclusive to the Vita. The most notable of which is a pinch feature using the touchscreen which allows users to zoom into the gameplay at any time, allowing you to see the beautiful graphics as close as you like, while it also serves as a useful option for collecting goodies throughout levels.

One disappointing aspect of Origins for Vita is that unlike the console versions, you won’t be seeing a multiplayer mode. However, Ubisoft has confirmed that the Vita version will feature a ‘Ghost’ mode, which will allow players to race against friends in speed runs in time trial mode.

To give you an idea of how gorgeous the game design is for Rayman, we’ve included the original PS Vita trailer below. There’s also some new screenshots to take a look at on the official PS Blog here, and we’ve uploaded the official Vita box art for you as well.

If other developers aim to produce PS3 quality on their upcoming Vita games as a primary focus like Rayman Origins here, then it can only mean good things for those willing to fork out the cash when the handheld launches in a few weeks. Are you planning to pick up Rayman Origins straight away? I’ve played Uncharted Golden Abyss for numerous hours, but I’m definitely more pumped up for this Rayman game. 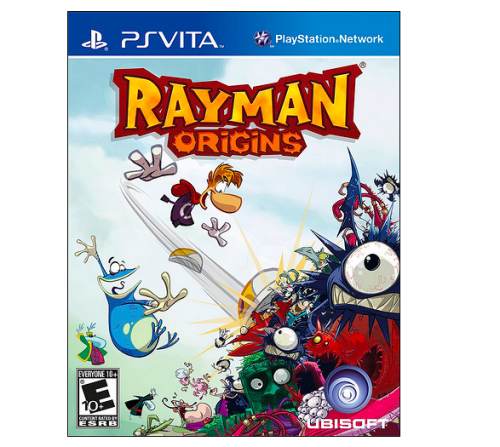