The Elder Scrolls: Imperial Edition was only announced a week or so ago and rapid amounts of pre-orders have been taken already. The luxury version of the ESO packed with goodies will release beside the normal version in April.

Since being announced, the Imperial Edition has smashed the standard copy of the game in per-order numbers by a factor of 5. Venture Beat has reported that pre-orders were taken for 1,500 digital copies of The Elder Scrolls Online between January 29th and February 2nd. Imperial Edition copies accounted for 1250 whilst standard versions only amounted to 275, creating a ratio of 4.6-1.

We expect far more copies to be pre-ordered between now and launch so these figures could change rapidly, although eventually more regular versions will be downloaded than Imperial due to pricing. The premium version can be reserved as a digital copy which you can download on launch with all of the additional bonuses implemented. 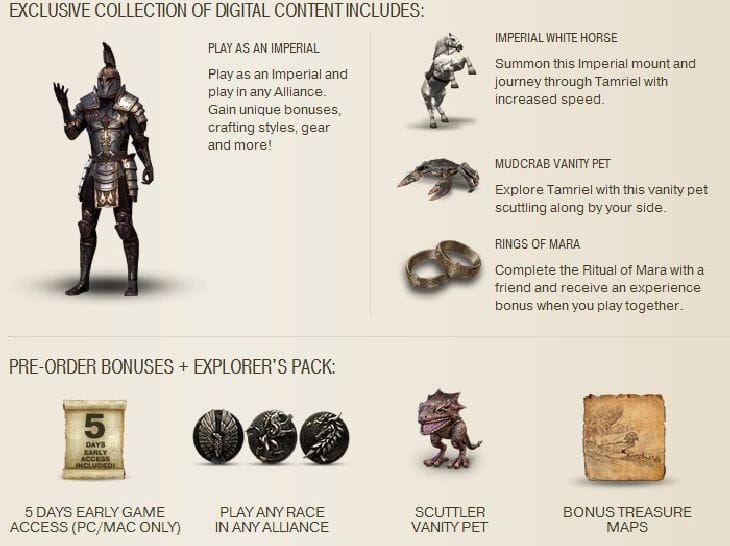 For the collectors among us, a very rare physical steelbook version of the Imperial Edition has also been made available for pre-order. Elder Scrolls fans will love the exclusive treats added to the disc edition which has been described as being in extremely limited quantity, find out more here. You may also be interested in what impact the ESO may have on the Elder Scrolls 6.

You can watch an unboxing video for the Imperial Edition which we featured earlier this week, this should raise some excitement. As you will know the ESO releases on PC and Mac first, with PS4 and Xbox One console versions coming later in June. Which version of the Elder Scrolls Online will you be buying?