Radamel Falcao has joined Manchester United with fans expecting some amazing things from this footballer, and the goals have now started to arrive after scoring his first goal for Man Utd during the recent Everton FC game. Fans and gamers alike hope this is the first of many, so today we wanted to showcase some of Radamel Falcao’s best goals in the new FIFA 15 game.

The first Radamel Falcao goal in the football simulation is pretty simple and can be seen within the first featured video below. It’s a nice shot, but nothing amazing, although within the second FIFA 15 video you will see Falcao score for Man United with a diving volley in the box. 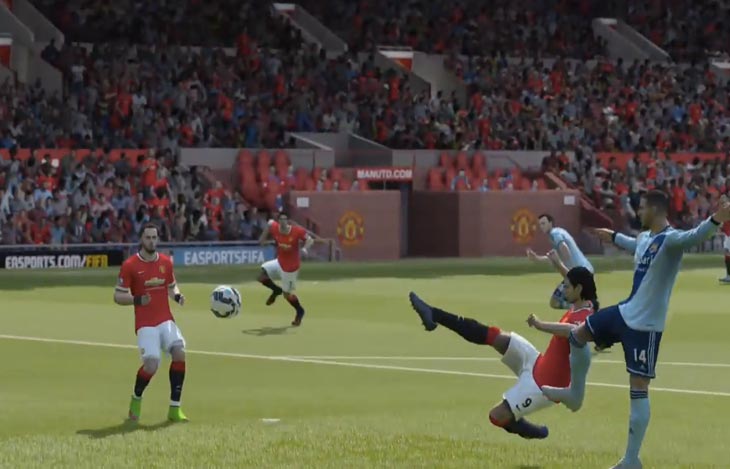 If you want to see a goal from a little further distance, then check out the third video that sees Falcao score from just past the halfway line. This FIFA 15 gameplay shows that it’s never too early to attempt a shot, well at least within the FIFA football game anyway.

We’ve seen other players achieve a halfway line goal in real-world football, you might remember Wayne Rooney doing just that, although Radamel Falcao has had his fair share of goals before he started playing for Man Utd and we’ve featured some of these real world goals in the fourth video.

On a side note, if Manchester United want to keep Radamel Falcao they would need to pay around £43 million to sign him. Falcao has already hinted at wanting to stay at Man U way past this season, but would the fans want that as well? Leave your comments below.

Would you love to see Radamel Falcao continue to play for Manchester United well into 2015, or do you want his loan to end this season? Take a look at the goals below from within FIFA 15 playing for Man Utd, and the real world goals within the fourth video, then let us know in the comments if you want Falcao to stick around with this club.