You might have heard the rumors circling Radamel Falcao and a possible transfer to Manchester City FC this weekend. The latest news arrived today with Man City offering £55 million to AS Monaco, although time is running out with the transfer window about to close and a decision on Radamel Falcao imminent.

We are also about to enter the release month for FIFA 15, so it seemed like the perfect time to feature a couple of rating prediction videos focused on Radamel Falcao. These predictions were made before Man City made an offer for Falcao, although both make the same 90 overall rating card prediction for FIFA 15. 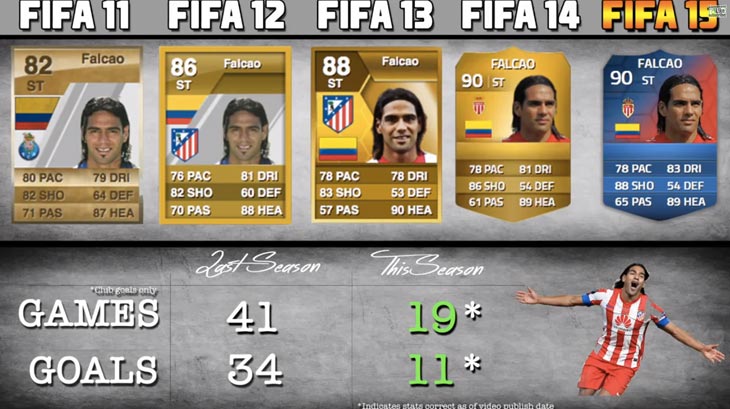 You can see both videos below that start with Falcao’s FIFA 10 rating of 82 and work through the different titles up to the predicted card for FIFA 15. If this rating is proven correct, then we would see Falcao stay at a 90 card.

We’ll know within the next 24 hours if Radamel Falcao is moving to the Premier League at Man City. This of course would bring a change to FIFA 15 as well, although for now take a look at the reasons given for the card prediction below along with a closer look at his progress through the game upgrades over the last 4-5 years.

Would you like to see Radamel Falcao as a Manchester City player in FIFA 15? Also, do you agree that he should stay at a 90 overall rating in the next game?

We’d also love to hear what you think might happen before the football player transfer window shuts, so leave comments below.