If you are currently addicted to Quiz apps such as Quizup, we’re here to tell you that another contender has just arrived. The Quizduell app for Android and iOS is a great alternative, but unfortunately there doesn’t appear to be an English version at the moment.

After the sensations and enjoyment with the Elf Yourself app over Christmas, consumers have been looking for the next quick social app fix to bide the time. Most fans are waiting for the Quizup Android app release date, but so far we are yet to see any announcement from the creators.

This delay has perhaps given other developers the spark to make their own quiz apps on mobile devices and tablet. Quizduell is one example and it’s available to download for free right now on Android and iOS.

The app features a database of over 25,000 questions and claims to offer 500 new questions on a daily basis to keep the app fresh for users. There’s a heavy emphasis on multiplayer play, allowing you to take on your friends in a showdown consisting of 6 rounds with 3 questions per round. 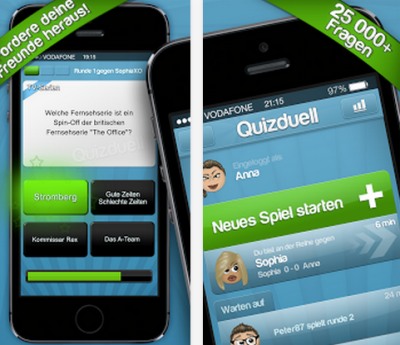 Players take turns to choose categories of questions, with the fun element being that they can also select categories which they think their opponent may struggle on.

As good as Quizduell is, there are some issues at hand already. The biggest of all, is that there is no English version which many fans have been requesting since release.

Another problem with the Quizduell app, is that fans have been complaining that the ad featured on the app promoting the paid version, is too obtrusive and a cause of hassle when trying to get through questions.

Have you tried out the Quizduell app yet, or do you still think Quizup is the number one?