If you are a smartphone user who has just become aware of the benefits of using QR code apps for Android and iPhone, we have a selection of apps which we think you may enjoy trying out.

QR codes are all about convenience to the user and several apps available on the Google Play Store and Apple Store aim to offer just that.

You may have noticed recently, that QR codes are everywhere. They frequently pop up in magazines, on public transport and even being featured on some buildings in some places.

Product manufacturers draw and suck the user in with their code tucked nicely inside an advertisement and it seems that most of you are more than happy to play the game. 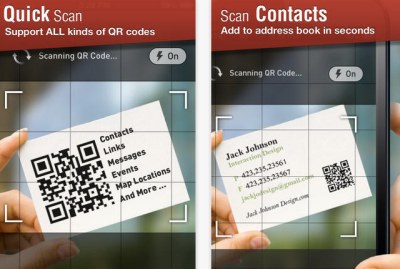 For those that are looking to get started, we have some apps which we think stand out among the rest. Starting with Android, there’s QR Bar Scanner, QR Droid and QR Code reader – all of which contain handy little features including tools to create your own customized QR code if you need to.

On iPhone, head to the respective App Store links and get your hands on QR Code Reader and Scanner, QR Reader for iPhone and Quick Scan QR Code Reader.

All of the apps mentioned and highlighted above have received very favorable reviews on the App Store and Google Play Store. Try them out now on your device and let us know which one you are currently using and think is best.

Are you addicted to QR code scanning now or yet to see the thrill of it?