Sony and portable gaming fans alike can rejoice as in the build up to the release of the Next Generation Portable (NGP), the Japanese company has reduced the price of their current generation model PlayStation Portable to just under $130.

As from Sunday February 27th, gamers will be able to purchase the PSP-3000 for the small price of $129.99. Sony will also be adding more titles to its PSP Greatest Hits collection for $20. The games include LittleBigPlanet PSP, Metal Gear Solid: Peace Walker and Assassin’s Creed: Bloodlines.

Since the PSP System was first released in 2005, it has sold over 67.8 million units across the globe, at least 23 million of which was in the U.S alone. There have been a total of 590 game titles offered and counting. As the full press release says the portable device is still today being hailed for being the ‘first truly integrated handheld entertainment system.’ Check out the rest of the article at Engadget. 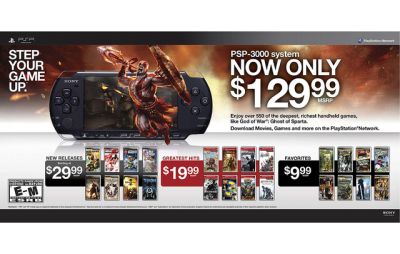 In addition to this deal, Sony will also be bringing out PSP Entertainment Packs for less than $160. To kick start their campaign they will be launching new commercials digitally and on TV. Check out one of their adverts at PlayStation.Blog.

For those of you waiting to get your hands on the NGP in the meantime can enjoy this great offer and it should take your mind off it for now. What do you think of the offer? If you don’t already own a PSP will you now be getting the PSP-3000? Let us know.