We have an important heads-up for all PS4 players now. Unfortunately, the PSN is about to go down again but thankfully with a prior warning from Sony and confirmation that PSN routine maintenance is about to happen.

Over the last month, PlayStation users have had to ensure multiple PSN outages, most of them coming as a complete shock due to frequent DDoS attacks.

This time though, we are expecting some planned maintenance and we hope that it is due to Sony’s promises to increase security in preparation over future attacks.

The important details that you need to know, is that PSN will be down on January 15 for a total of four hours according to Sony’s estimation. 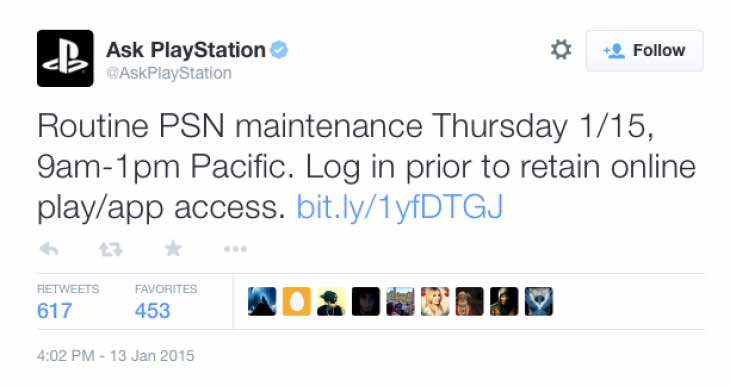 The PSN maintenance times for PST will be between 9am to 1pm. For Eastern Time that means the PSN will go offline at 12pm to 4pm. For gamers over in the UK, expect the maintenance window to be between 5pm and 9pm GMT on Thursday evening.

The good news is that you will still be able to play online and access Netflix on Jan 15, as long as you sign in prior to the maintenance times.

Sony has confirmed this as fact on their website, so make sure you are signed in well before the start time as highlighted above. Just to clarify, PSN should be back up on Jan 15 at 1pm PST, 4PM EST and 9PM GMT – let’s hope that Sony does not run into any problems.

Let us know your thoughts on the planned maintenance. Are you happy that you at least have a heads-up on the maintenance this time, compared to recent hacks with no warning?