As most PS3 gamers are aware, there were 3 massive titles that have released demos of their up coming games today. The demos are Dead Space 2, Mass Effect 2 and LittleBigPlanet 2. We are hoping you have downloaded all 3 so that you can give us some feedback.

We already reported that the demo would be available and have informed you of the available screenshot comparison for Mass Effect 2. ME2 has become a highly anticipated release and it was very successful previously on the Xbox 360.

Dead Space 2 is looking really impressive. This demo has come out a full 5 weeks before the intended release date. We have reported various screenshots and the official ‘Dementia’ trailer for you at home. Now we want to know what you think of the demo.

We also saw LittleBigPlanet 2’s demo hit the PSN store; this one has also been a highly anticipated release. We have been keeping you up to date as there were some issues surrounding the intended release date as it has changed from November to January. 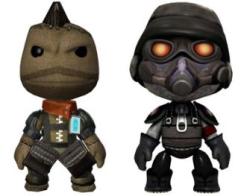 Now that all of you have had some time to play these 3 demos we want to know if your wishlist for 2011 has changed? Which of the 3 is your favorite demo? Let us know your thoughts in the comments below.