We have a heads-up to say that Sony will soon be updating the PS4 system software again with a brand new version. Unfortunately though, the PS4 update 2.57 notes will not contain any new features so you shouldn’t get excited about it.

First of all, you may be wondering why Sony has decided to skip 2.56 completely. The current version is 2.55 as seen here but the next version to drop will be 2.57 – we wonder what the reasons are for Sony doing this?

The official PlayStation Twitter page has given users a heads-up to say that another minor stability update is on the way – the exact same update that 2.55 delivered. 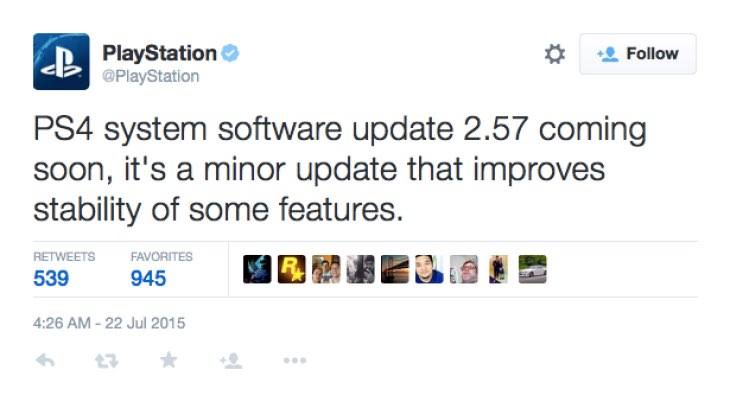 Hopefully this can only mean that these minor updates in succession are to prepare for something major that is coming with the PS4 3.0 update – one can only hope.

We know that many of you are still waiting for missing PS4 features, so hopefully Sony is listening and will be expanding upon the PS4 feature list soon.

PS4 firmware update 2.57 will be live soon, so give us your thoughts on it and tell us what feature you are still waiting to see on your console.