With the surprise PS4 2.04 update that landed a few days ago but offered only more stability improvements, we now look ahead to the PS4 update 2.05 or potential PS4 update 3.0 if Sony are planning to make the next PS4 update a major one.

We know that many of you were disappointed with the last firmware update, especially as it came with huge problems initially when it launched with an error code affecting users globally.

Now that is behind us, there are rumors online suggesting that the next PS4 firmware update is going to be a big one with some new PS4 features to enjoy at last. 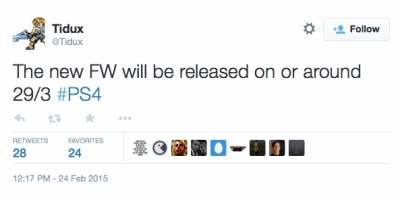 Tidux is known for revealing PlayStation leaks in advance and sharing them with users on places like Neogaf. This week, he has taken to Twitter to reveal out of the blue that the next PS4 update will arrive on or around March 29.

Furthermore, he has added that the update coming will be classed as a ‘big’ update and that it will be coming with ‘new features’ – which is music to our ears if true.

Meanwhile, Sony’s Fred Dutton has seemingly hinted towards this update by replying to a user on the PS Blog that the next PS4 update ‘is not too far off’.

Obviously, we don’t want to get carried away but it’s no secret that PS4 users are now overdue on some new functionality for their console – especially given the fact that we’ve just had a major Xbox One update.

There’s also a fairly long list of missing PS4 features that Sony needs to implement – DLNA, folders and Friends notifications to name some of the obvious ones.

Assuming that the next PS4 update is going to bring new features, Sony may decide to bring the console up to version 3.0 to coincide with it being a ‘major’ update.

Let us know your thoughts on the next PS4 update and what features you are personally waiting to see. We’ll update you whenever we find out any more rumors on the next firmware.