PS4 Share Play was touted as a game changing feature for PS4 owners and with the arrival of PS4 2.0 update, that dream was realized for many. If you are in Activision’s shoes though, this kind of generosity doesn’t come for free which is why PS4 Share Play is not working in COD Advanced Warfare.

PS4 Share Play has the wonderful ability to let a friend try a game, without needing a copy of it to play. It’s perfect if you are considering a purchase but want to try it beforehand – basically like an instantly accessible demo which your friend has the keys to.

Activision however, does not want you to enjoy such goodness. We attempted to test out PS4 Share Play for the first time, but we were met with an error which reads:

In reality, there’s no blocked scene at all. Activision has blocked Share Play out completely as they don’t want you to preview the game without buying it. 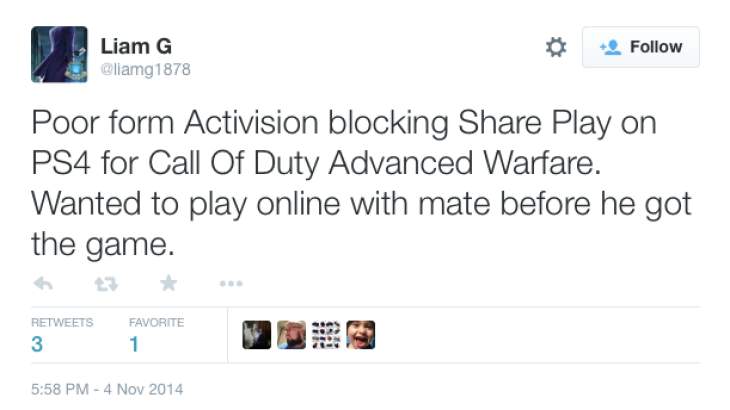 Sony has just effectively spared Activision’s blushes by displaying the block screen message, a message which you will likely see again when other publishers decide to take on the role of The Grinch.

We tested the same feature with FIFA 15, an EA game which worked without any problems. To the bad reputation that EA receives from internet warriors, they are clearly not as bad as Activision on this occasion given that they are giving Share Play users complete access to their latest release.

This is obviously the first high profile game that PS4 users will not be able to enjoy with Share Play. There will definitely be more along the way, but COD Advanced Warfare has been the ice breaker.

It’s not a nice feeling when you see that blocked message plastered on the screen, we were actually wondering if it was a technical problem on our end in actual fact.

How upset are you that Activision has shut the door on COD Advanced Warfare not working with Share Play? Could the blame actually rest with Sledgehammer Games who said no, rather than Activision?

After all, Destiny is working with PS4 Share Play and that is a game which is also published by Activision. It will be interesting to get to the bottom of this so let us know what you think about COD Advanced Warfare blocked on Share Play, while Destiny is not.