It looks like we are closing in on the highly anticipated PS4 firmware update 3.0 release date, Sony’s next major update for the console after recent minor patches.

We know that PS4 3.0 update will be the next PS4 update as Sony documents were recently leaked over in Japan confirming a beta test.

Now we can see that Sony are planning to open the same beta for users over here, as they are now taking applications. You can apply to beta test the new PS4 firmware update here, simply by leaving your PSN username – it appears to be pot luck on whether you get in, however.

Either way, thanks to the Japanese beta we can already bring you a provisional PS4 update 3.0 feature list with some features that Sony will definitely be bringing. 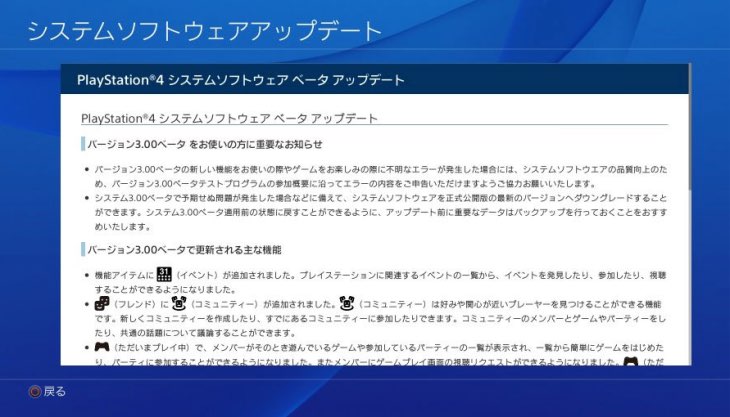 One of these is the arrival of PS4 Communities. This is going to be a new menu with Friends, allowing players to set up communities based on existing tastes and interests – think of Google+ Communities for example.

Another great feature that is on the way is PS4 Events. This is going to be a new hub for players to watch and chat together for official Sony events such as E3, PlayStation Experience and hopefully even events such as TGS and Paris Games Week – we can’t wait for this feature to arrive.

In 3.0, Sony will also be placing a greater emphasis on the existing Now Playing feature in the ‘What’s New’ section. From there, players will be able to find out what games friends are playing and join games or parties instantly from communities. 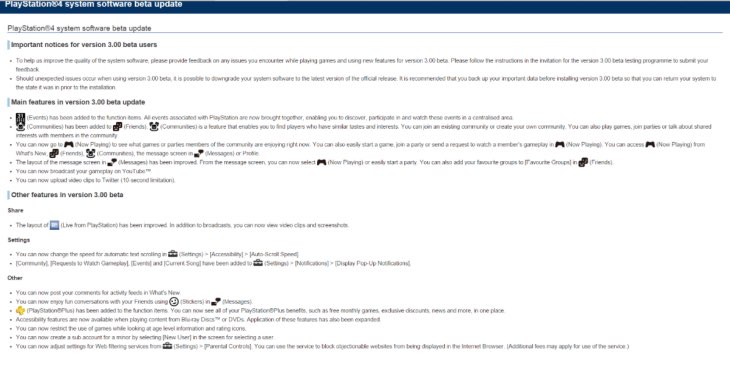 For the broadcasters out there, it looks like 3.0 is going to bring some nice additional features for you too. These include live streaming from YouTube and also uploading video clips direct to Twitter.

You can see the full set of what is new in PS4 firmware update 3.0 above. Remember that this is only the list so far – Sony will probably add to this once the final version is due to go live.

What are your thoughts on these features. Has Sony missed something else that you would rather see as a priority?