One of the best PS4 console bundle deals arrived at midnight and at a price with FIFA 17 that shocked those looking for stock in Smyths, Tesco, Argos, Asda, John Lewis, and other popular online retailers. When adding the older PS4 console with FIFA 17 to create your own bundle, the prices dropped by at least £100.

This massive price reduction was first noticed on Tesco early yesterday, which resulted in stock selling out fast for those that managed to get a pre-order in with the PS4 console and FIFA 17. The bundle went live from midnight on September 29th, the FIFA 17 release date, across most web stores and also in-store.

Biggest Gaming Deal of the Year – This is the message gamers were spreading on social media, especially those that managed to purchase before stock sold out. The first deals arriving at midnight saw the PS4 console and FIFA 17 bundle price drop to £149 all in, which is incredible. 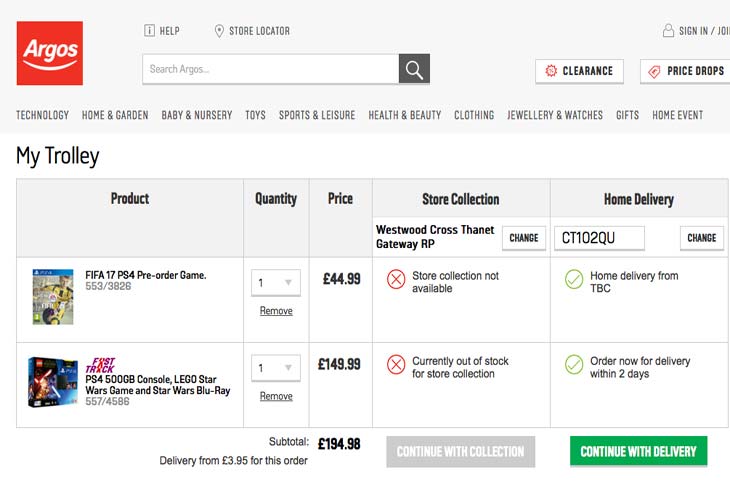 Later on in the early hours, until about 5am, you could still order for delivery at Argos with the game and console coming in at below £194.98, as seen in the screenshot above. In fact, this version also come with LEGO Star Wars making it an even better deal.

You still might be able to get hands-on with this price drop by visiting other lesser visited retailers in-store, so we’d recommend checking the likes of Sainsbury’s and Morrison’s early today. You just might find the PS4 console and FIFA 17 bundle in stock for this crazy price. Good luck all, and let us know in the comments if you still managed to find stock anywhere.