Sony may have only just pushed firmware 3.0 to PS4 users, but it’s clear that there’s still a lot of area for improvement in terms of missing PS4 features.

Thankfully, we have some good news in this regard as it looks like Sony are already well into their planning stage for the Sony PS4 firmware 4.0 update release date.

A survey has slipped out into the public domain, revealing a list of features that Sony are asking users for input on. They include the majority of the outstanding features yet to arrive, such as PS4 online and offline notifications, PS4 folders and custom backgrounds for PS4.

What is interesting though is that there’s also some other features that haven’t been discussed in great length yet. These are the possibility of a PS4 ‘appear offline mode’, the ability to change your PSN name and also increasing the max number of people in a party. 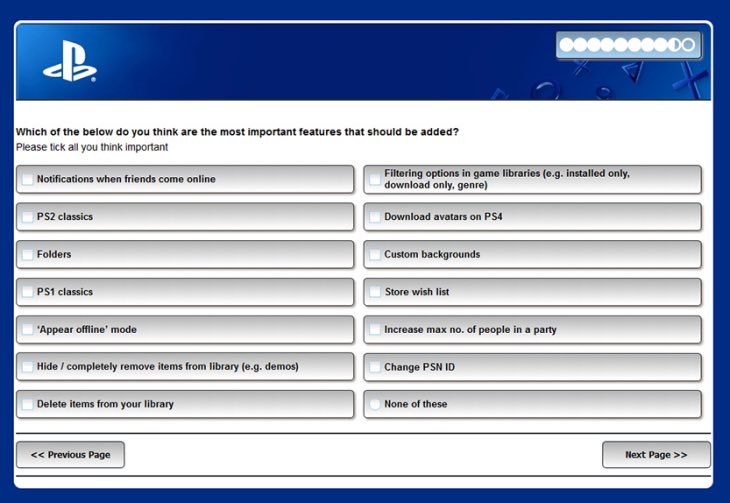 We also see PS1 and PS2 classics on the list which is very interesting given the fact that Sony already offer this with their paid-for service PlayStation Now.

Are Sony finally ready to offer a different solution for gamers given that Microsoft is just about to win over a lot of gamers with free Xbox One backwards compatibility?

Either way, this survey poses a lot of questions which we want your feedback on. Which out of the above would you love to have as official PS4 system software 4.0 features?

Would you love Sony forever if they decided that PS4 backwards compatibility should be free to compete with Microsoft?