We have some exciting news for PS4 owners now, as it looks like some key information with regards to the upcoming PS4 2.50 update new features have leaked thanks to beta testers who couldn’t keep silent.

PS4 2.50 is set to be the next software update that will finally add new functionality to the console after numerous stability and security updates in the last few months.

Thanks to screenshots leaked from the PS4 2.50 beta that’s now in testing, we can confirm that once this update is rolled out publicly, it will include full functionality to PS4 Rest Mode.

By this, we mean that you’ll be able to pause a game or an app, put the console into Rest Mode and then resume where you left off without having to close the game or app. 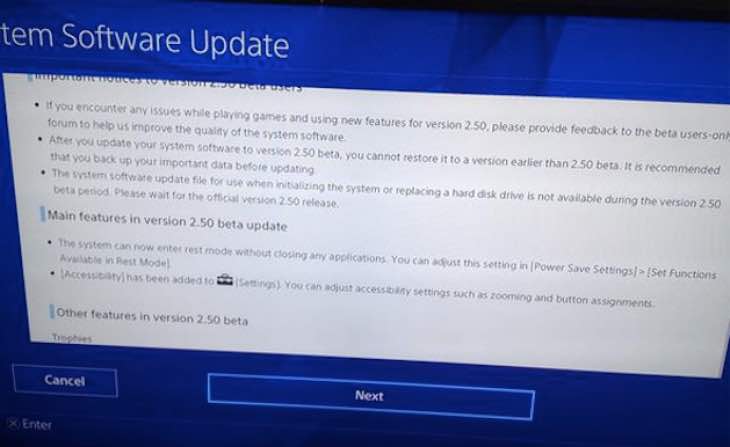 It was a feature that Sony initially promised in the build-up to launch and now it’s great to see that it’s finally ready to roll out for everyone.

On top of this, we can also see that Sony are adding PS4 button mapping too, for anyone who would like to assign different keys to the DualShock4 controller.

We’re not sure what Sony’s long term plan is with this feature, but we can see some usefulness for sure with shooters for those that may want to change the shoot button permanently to something of your choice.

Finally, the PS4 2.50 update notes that have leaked also reveals that Sony is upgrading SharePlay features as well. Now, you’ll be able to join and host sessions with 60FPS as a default playback setting – previously it was capped at 30FPS.

It looks like this update is coming very soon since it’s been tested, although Sony won’t be happy with users leaking the information early.

Images of the update features are already all over Twitter and Neogaf so the secret is definitely out. Let us know what you think of the new features in PS4 2.50 – are you happy with the PS4 suspend/resume feature that is coming?