Earlier on this month we told you that details of the PS4 2.50 update had leaked, after beta testers had ignored the NDA and proceeded to upload images of the new features that were coming.

Now, it looks like Sony may have been forced ahead of schedule to officially acknowledge that the PS4 2.50 firmware update is indeed a real thing and that it’s in progress at the moment.

The company has now taken to the PS Blog, with Sony’s Product Planning & Software Innovation director Scott McCarthy giving PS4 gamers worldwide a heads-up on what will be coming with the next major PS4 update.

The big headline is PS4 Suspend/Resume, which in other words is the fully functional Rest Mode, which Sony promised in the build-up to launch – but didn’t actually allow you to pause games, go into Rest Mode then resume where you left off. 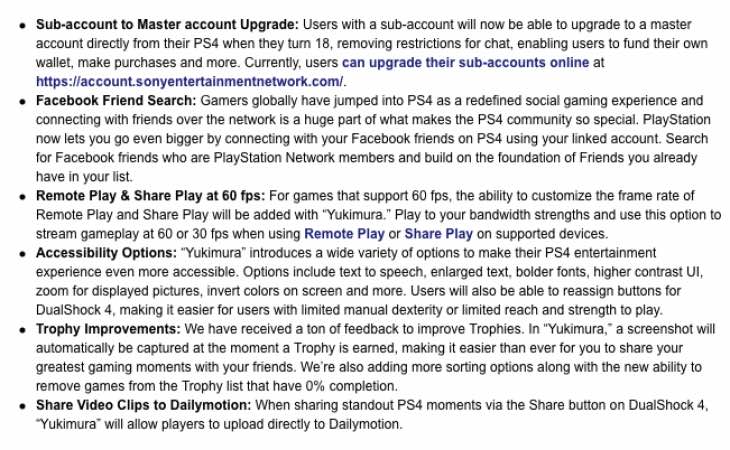 With 2.50, this will finally be possible. That’s not all though as the image you see above contains the initial PS4 2.50 update notes with even more new features to enjoy.

They include 60FPS support for both PS4 Share Play and Remote Play, while Sony has paired up with Facebook to make it easier for PS4 users to find other PS4 users who are on your Facebook Friends list.

One feature that wasn’t leaked and is a complete surprise is PS4 Dailymotion support. This is coming with 2.50 and will be available as an extra option when using PS4 Share, along with the existing Facebook, Twitter and YouTube options.

There’s also improvements to the PS4 trophy system, so read through the initial notes above and let us know if you are excited about this latest update.

It’s obviously been a long winding road since launch – are you satisfied with the current PS4 feature list, or were you expecting to see a lot more at this stage?