It has been a long time coming, but we finally have the confirmation from Sony that you have all been waiting for. We now know the official PS4 2.0 release date will arrive next week and will bring the awesome-looking SharePlay feature to the PS4.

SharePlay is going to be the standout feature for the new software update, allowing users to share their games with friends and let them join in on sessions – without needing a copy of the game in question.

Now, Sony has given an excellent preview of how this works, even demonstrating how SharePlay will have full support for FIFA 15 – allowing for instant head-to-head matches with a person on your friends list who doesn’t even have a copy of FIFA 15, amazing. 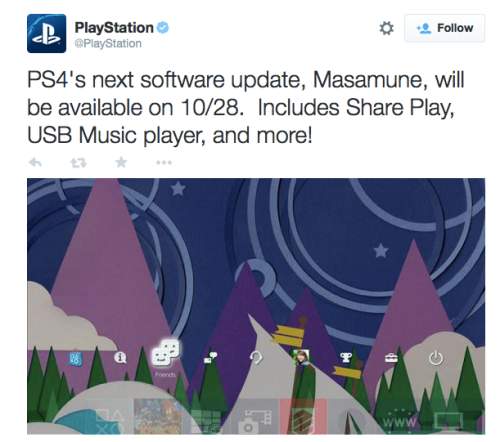 Even better, Sony has said that the update will be available on Tuesday October 28 so you can all prepare yourselves for a massive update next week. We just hope that the PSN maintenance problems are well and truly behind us and Sony will be able to cope with everyone downloading the update from the PS4 servers at once.

We can see that this is a game-changing feature for the console as unlimited co-op sessions with a friend (albeit with 60 minute reconnects) is going to be a wonderful feature for any game with a co-op campaign mode.

The possibilities are going to be endless with SharePlay too, just think you’ll be able to instantly challenge an opponent to a game of Mortal Kombat X without the guest needing a copy of the game – Microsoft may be slightly jealous of this functionality.

Watch the preview video below and let us know how excited you are. What game are you going to try SharePlay on first?

As an Xbox 360 or Xbox One owner reading this, can you admit to feeling a little jealous of this feature that PlayStation gamers are getting? Don’t be surprised if Microsoft are now racing around the clock trying to emulate this feature for next year.