For one reason or another you might want to download the PS4 1.72 update file and install via a USB stick, so in this article we’re letting you know exactly how and where you can do this.

Following our article reporting the PS4 1.72 update is live, you can now find the release notes on PlayStation’s website and a direct link to the download file. If you really don’t want to install the new firmware automatically over the Internet, then you can download the file from this official Sony server.

As we reported earlier, the new software doesn’t do much other than improve the system stability. This is something a few gamers are getting very annoyed with and one Product Reviews reader stated, “You would think the PlayStation 4 system would run just fine after 7 months”. These people are wondering where many of the expected features are, especially now we’re many months after release, so now they’ll be looking towards PS4 1.73 or 1.80 updates.

Installing the PS4 1.72 update by USB – first download the new firmware from the official download link above, then get a USB storage device and follow the instructions below by starting with creating a folder named “PS4” and another inside that named “UPDATE”. 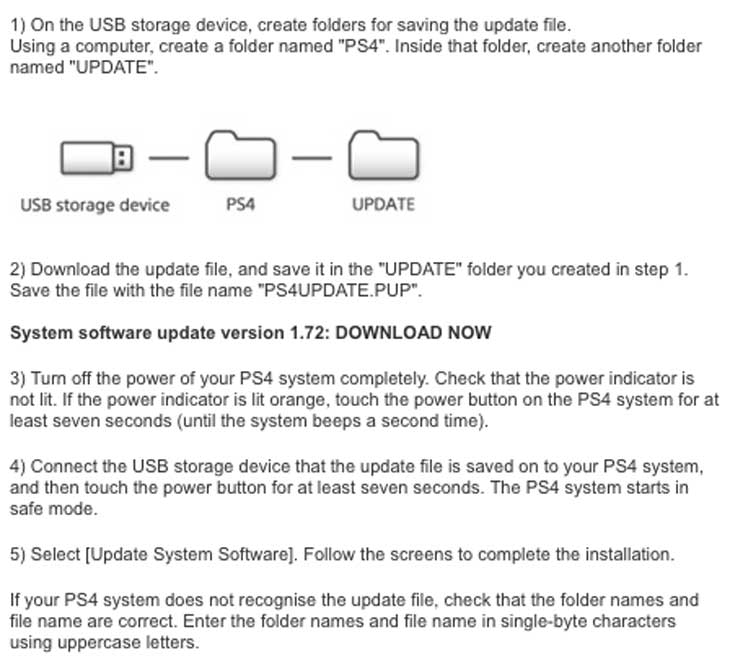 If you’ve installed the new update, feel free to let us know how the install process went and if you had any problems.