We told you that the upcoming was coming very soon and now we are pleased to confirm that Sony PS4 update 1.71 is live for both US and UK regions. We are surprised to see that it has gone live so fast, as we thought Sony would make gamers wait a little longer.

It is now confirmed that the update is live as we speak though and the PS4 1.71 firmware is 194MB. It shouldn’t take long to download at all but most of you will have received a notification to update as we did.

We knew that Sony would be targeting bug fixes with PS4 1.71 but other than that no major new PS4 features are expected with this update. Below is an image showing the full PS4 1.71 update notes, revealing that this is only a minor update for users. 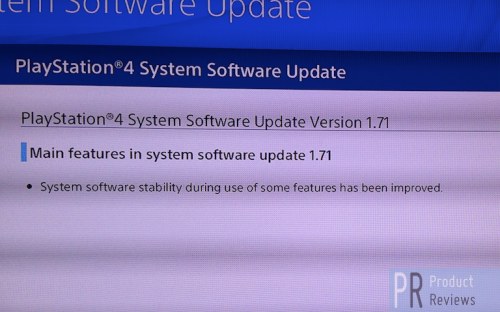 Most of you will be seeing system stability notes, but as always Sony may have put in some 1.71 hidden changes that hopefully you will tell us about after exploring.

Unfortunately, there is still no news on PS4 3D Blu-Ray support. Let us know what you can see after installing the 1.71 PS4 download and if you have noticed any major changes that we should know about.

Update: We’ve had a play with the PS4 1.71 update for a couple of hours since it went live, and sadly there’s nothing else to report in terms of new features. The good news is it seems bug free and installed without any issues, so we can only look for 1.72 and the features we wanted like 3D Blu-ray support.