If you were not planning to pick up God Of War III when it is released exclusively for the Playstation 3 on March 16th (19th in UK), perhaps you should re-think your plans. It has been rumored that IGN has given the game a full 10/10 review score.

As reported from VG247, the image you can see below was apparently taken from the website, but has now obviously been removed.

It is worth pointing out that it isnt the first time IGN has put review scores up early by mistake, take Modern Warfare 2 as a prime example.

One thing is for certain though, GoW III is shaping up to be one of the highlights this year on the PS3. Is it really worth a 10/10 though? Let us know what you think.

UPDATE: IGN has just informed us, that the screenshot was indeed a fake. So no 10/10 for God Of War just yet folks. It also turns out that the Modern Warfare 2 early score was a fake also, it was just ‘lucky’ that it happened to be 9.5 score as well. 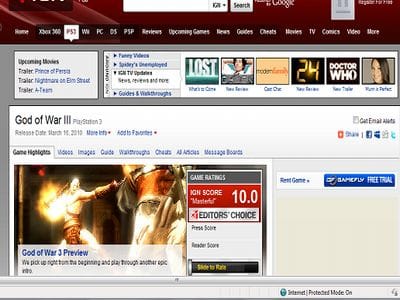